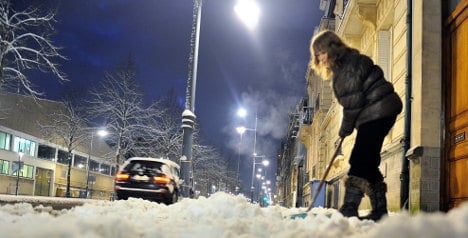 A woman clears snow from outside her home in the northern French town of Arras on Tuesday. Photo AFP/ Philippe Huguen

While Paris was largely spared the heavy snow, 14 regions remained on orange alert, which warns the public of potentially dangerous conditions such as black ice.

In the northern city of Lille a motorist narrowly escaped death after passers by pulled him from his car after he skidded off the road and into the icy waters of a canal.

France’s traffic information agency, CNIR described driving conditions on motorways in the north of the country as "delicate".

There were reports of tailbacks on the A29 near Amiens in the north and on the A20 in the south-west both caused by trucks coming a cropper in the wintery conditions.

France’s BFM TV station reported that motorists in Lyon were asked by authorities to delay their journeys on Tuesday morning with heavy overnight snowfalls causing traffic chaos on roads leading in to the city.

Roads in the hills around the city centre were reportedly impassable.

Elsewhere in France the country’s weather service Meteo France warned of an avalanche risk in the Pyrenees.

“Some avalanches could potentially threaten roads in the area around Ariege and the Hautes Pyrénées.” Meteo France said in a statement.

The cold spell is set to continue throughout the week.