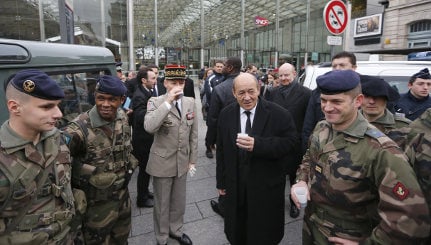 Leaders of the militant Islamist groups under attack in the West African state have warned that France has "opened the doors of hell" by unleashing its warplanes and have called on fellow extremists to hit back on French soil.

Valls said everything possible was being done to ensure that did not happen, while cautioning that the threat posed by foreign and homegrown extremists had existed long before French forces went into action in the former colony.

"In terms of evaluating the risk, we have to be prudent. But our interior and exterior intelligence services are being extremely vigilant.

"The threat is not new but it is very strong and we have to be fully mobilised to meet it."

France has not yet raised the level of its national anti-terrorist alert system to the "scarlet" level that was briefly applied last year when Islamist gunman Mohamed Merah went on a killing spree in and around the southern city of Toulouse.

Under the current "reinforced red" alert, France has stepped up security at all public buildings, railway stations and other transport facilities as well as at airports and nuclear power plants.

Special measures have also been put in place to deter potential attacks on the embassies of foreign countries that have backed France's action, with US, British and Israeli interests deemed to be the most likely targets. Merah's killing of a rabbi, three Jewish children and three French paratroopers and the dismantling in October of an Islamist "terrorist cell" have highlighted the extent to which France faces a homegrown threat.

Anti-terrorist judge Marc Trevidic said there had already been a trickle of French Islamists heading to Mali before France launched airstrikes on Friday.

Trevidic said there were currently four separate investigations into French-based militants who have travelled to meet or otherwise made contact with the Malian groups.

"There's always one Malian involved but often it is groups made up of a patchwork of nationalities: French converts to Islam, people from across North Africa, Nigerians, Senegalese, etc…" he added.

"You can be sure that we have them under very close surveillance – the trick is not to pounce on them prematurely before we know what they are up to."

Hamedi Diarra, a leader of the sizable Malian community in France, said he did not think his Islamist compatriots had the means to carry out attacks on French soil.

"I think it is more likely any reprisals will be targeted at French expatriates in the region," he said.

One of the groups in Mali, Al-Qaeda in the Islamic Maghreb (AQIM), emerged from the GIA, an Algerian-based group that carried out a wave of deadly bombings in Paris in the mid-1990s.

But terrorism expert Jean-Charles Brisard said it was not certain that AQIM or any of its allies had the capacity to mount attacks in Europe.

"It is difficult to get a sense of how real the threat is but there is nothing in the recent past to suggest that it is," Brisard said.