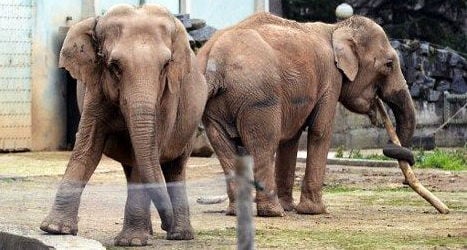 In yet another twist to an ongoing saga over the pachyderms' well-being, the president has responded in writing to French film star Brigitte Bardot, confirming that the death sentences of Baby and Nepal would be suspended.

The two former circus elephants, who have TB, had previously been deemed a threat to the health of other animals and visitors to the Tête d'Or zoo in Lyon, but a high-profile campaign by the Brigitte Bardot Foundation seems to have paid off.

Hollande has instructed the Minister of Agriculture, Stephane Le Foll, to “investigate the health of the animals”, and the treatments that might realistically be available for them, according to the letter, which has been published by the Bardot Foundation and dated January 9th.

Christophe Marie, spokesman for the foundation, told The Local that he saw Hollande’s decision as “very encouraging.” “It’s the first positive response we’ve had, but so much is still unknown,” said Marie, who is also the charity’s director of animal protection.  “The findings of the ministry’s experts will decide a lot,” he added.

The announcement comes after Hollande originally refused to intervene in the case, despite a written appeal from the 1960s sex symbol Bardot, and her threat to emigrate to Russia if Baby and Nepal were not given a permanent reprieve.

The French president’s official letter to the 77-year-old film star contained a hand-written postscript that added, “I am aware of this issue and I will keep your Foundation informed.”