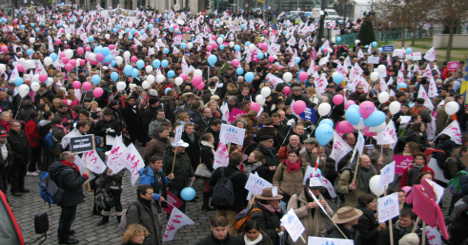 Concerns of protesters will fall on deaf ears. Photo:The Local

France’s government vowed to push on with its plans to legalise gay marriage on Monday, a day after hundreds of thousands of protesters took to the streets of Paris calling for the bill to be scrapped.

Despite Sunday’s demonstration being considered one of the biggest in recent history with hundreds of thousands taking part, the French government insists it will not listen to those calling for it to bin the proposal.

Speaking to Europe 1 radio on Monday, the Minister of Women’s Rights Najat Vallaud-Belkacem reiterated the Socialists determination to legalise gay-marriage as well as open adoption to same-sex couples.

“The government is totally committed to achieving this historic reform, which will not represent a victory for one side or the other but progress for society as a whole,” she said.

Law should be discussed in parliament, not the street

The turn-out for Sunday’s march in Paris was estimated somewhere between 340,000 and 800,000 with demonstrators travelling from all over France to voice their anger at the government.

“We have taken note of the rally and I am very respectful towards people’s right to protest, which is a fundamental right in our country,” Vallaud-Belkacem said. “But I am respectful of the right that this reform should be discussed by parliament and not on the street.”

The government plans to put the proposed legislation to parliament on January 29.  "This is a bill that strictly takes nothing away from anyone, which does not do away with the words 'father' and 'mother'…," Justice Minister Christiane Taubira told French television channel TF1 Sunday.

Once again, she ruled out a referendum on the issue, which she argued would in any case be unconstitutional.

One of Sunday’s demonstrators, Emmanuel Ducamp, from gay rights organisation Homo Vox, who is gay himself but against gay marriage said the government was not acting in the spirit of democracy.

“This shows they are not listening to what we are saying. We are telling them they are making a mistake and they should at least consider that,” Ducamp told The Local. “They are just being pushed into this law by a minority of LGBT groups who want to impose so-called equality.”

"The President of the Republic can at any time decide to submit a question to referendum: I don't think there is any appeal against that," he argued Sunday.

Monday's newspapers acknowledged the strength of the protest, even if they differed on how effective it would be.

"The Tidal Wave", read the headline on the front-page lead in the conservative daily Le Figaro. Describing Sunday's protest as "the biggest demonstration in Paris for 30 years" it expressed satisfaction that the right seemed to be rallying behind the call for a referendum on the issue.

Other dailies however, including Le Parisien and the freesheet 20 Minutes, pointed out that however impressive the rally, the government showed no sign of flinching.