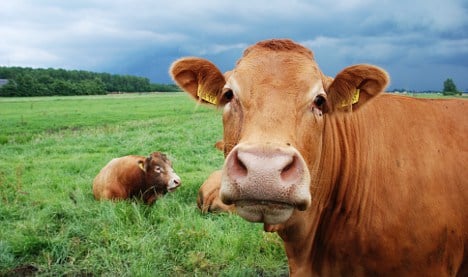 Will this cow be next? Every full moon spells danger. File photo: Wendi Domeni

Since late November last year police have received reports of seven violent attacks against farm animals, leaving local farmers furious and increasingly concerned. In a bid to stem the bloodletting farmers have reportedly taken to patrolling their fields at night armed with loaded guns.

In the seven attacks four cows and a ram have been killed by a gunshot to the head whilst two other cows were left severely injured after being mutilated. In most cases the attackers helped themselves to the meat from the bodies of the dead beasts.

According to a report in the regional newspaper Sud-Ouest, the attacks occur each time at night under the light of a full moon.

The newspaper carries details of one incident in which a cow was completely mutilated.

“They cut it in two and took the right shoulder, the right leg and all the loin,” the animal’s owner, farmer Jean Claude Leroy told the paper.

In another incident just before Christmas a cow was killed by hammer blows to the head before its ear, testicles and neck were removed.

The village is awash with theories over who could be behind the killings.

“I think they have some knowledge of butchery, even if they sometimes butcher the cow in any old way,” another local farmer Xavier Chiché told French daily Le Parisien.

Others including the mayor of Reignac Alain Gandré believe the attackers could be from the local region or have been given help from someone local.

"They are amateurs, but knowledgeable amateurs," said the mayor.

Local police have said they are not ruling out any motive for the attacks including possible revenge, or simply theft for personal or commercial reasons.

“Samples have been taken and ballistic tests are being carried out,” police captain Jean-Yves Martin told Le Parisien.