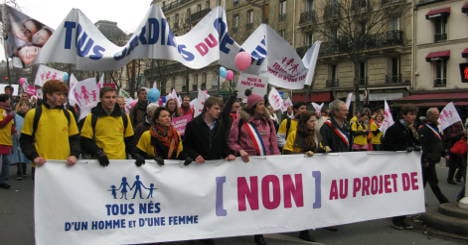 'Everybody is born to a man and a woman' reads the banner. One of many held by anti-gay marriage protesters in an estimated crowd of 800,000.

With the proposed legislation due to go before parliament at the end of this month, opponents travelled from all over France for a demonstration supported by leaders of the mainstream centre-right opposition, the Catholic church and France's five-million-strong Muslim community.

Organisers of the "manif pour tous” (demo for all) – a reference to the government's billing of its legislation as 'marriage for all' – estimated that 800,000 had taken part. Police however believe the figure was closer to 340,000.

The high turn-out will please those who want to put pressure on President Francois Hollande to change his mind, or at least hold a national referendum on the issue.

Hollande has made it clear he has no intention of dropping a promise he made in his election manifesto last year and is already pencilled in to attend one of France's first gay marriages once the legislation is enacted later this year.

Despite the protests, opinion polls have shown consistently that most voters support the right of homosexual couples to marry and a narrower majority favour adoption rights being enshrined in law.

The slim prospect of success did not appear to dampen the spirits of the protesters however as giant marches converged near the Eiffel Tower after setting off from three different starting points.

There was a festive atmosphere among the demonstrators with music blasting out from loud speakers as tens of thousands armed with balloons, banners and placards snaked their way through the streets of the French capital.

Andre Malrait, deputy mayor of Marseille travelled to Paris for the day to join the demonstration.

“We don’t want this law in France,” Malrait told The Local. “It will destroy the family. The government should at least hold a referendum.”

Another protester who had travelled from Marseille was Hervé Jourdain, who is gay but opposes legalising gay marriage.

“This is not about equality. I do not feel inferior just because I cannot get married,” he told The Local.

Many of the protestors were accompanied by children. Representatives of various religious faiths were also among the crowds.

Father Gregoire Maintenant, a Catholic priest from the west of Paris told The Local he was taking part as a citizen rather than as a representative of the Catholic Church.

“A child has the right to a mother and a father. It’s one of the basic necessities and it would be dangerous if it was lost,” he said.

In a separate protest to the main “manif pour tous” march, several right wing groups including the Catholic organisation Civitas, came together to express their opposition to the government’s plans to legalise marriage.

With members of far-right youth groups among the demonstrators this alternative rally was surrounded by a much greater security presence. Riot police were on hand to prevent the kind trouble that flared at a similar march last year.

War veteran Patrick Vigan, who joined the splinter protest, believed the future of France was at stake if gay-marriage is legalised.

“We see the family as the basis of society. If there is no family then we will have no country,” he told The Local.

The movement against gay marriage has given France a new celebrity in the form of its public face, Virginie Tellenne, a Parisian socialite who goes by the name of Frigide Barjot.

Her assumed name – a play on the name of French film star Brigitte Bardot, a sex symbol in the 1960s – translates as Frigid Loony.

"The president must listen to us," Barjot said on Sunday. "He must put this law on hold."

Among those who took part in Sunday's protest was Jean-Francois Cope, the leader of the centre-right UMP party.

"This is an important test for Francois Hollande because you can see very clearly that there are millions of French people who are very concerned about this reform," Cope said.

Supporters of gay marriage are due to stage their own demonstration on January 27, two days before MPs are set to discuss the bill in parliament.