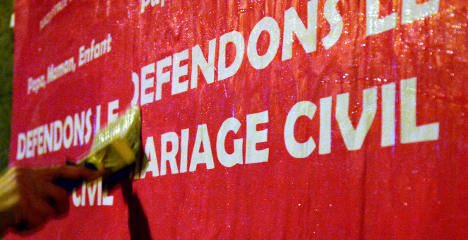 Protesters put up posters in city's across France in the run up to Sunday's anti-gay marriage march. Photo Damien Meyer / AFP

The rally is set to be one of the biggest demos in the French capital in decades.

Protesters are aiming to persuade French President François Hollande and his socialist government to drop plans to legalise gay marriage and open up adoption for homosexual couples.

The march, dubbed “Le Manif pour Tous” (Demo for everyone) is being led by a pro-gay comic who goes by the stage name of Frigide Barjot and is set to bring together a broad coalition of groups opposed to same-sex marriage, including certain gay-rights organisations.

Xavier Bongibault, from the group Plus Gay Sans Mariage (More gay without marriage), one of the main organisers of the event, told The Local the institution of marriage should be reserved for a man and woman.

“In France marriage is not a contract about love: it is a contract that creates the framework for the protection of children. I believe a child must have a mother and father,” Bongibault said.

“Everyone has the right to get married. I am homosexual but if I wanted to get married I could find a woman. Marriage has certain conditions, the main one of which is that it has to be between a man and woman.”

Bongibault admits his position has raised a few eyebrows among other members of the French capital’s gay community but like many of the protesters expected to show up on Sunday he insists opposing gay marriage does not make people anti-gay.

“There will be no homophobic people marching on Sunday. I would never walk next to a homophobic person,” he said.

"Government can still change its mind"

Legalising same-sex marriage was one of Hollande’s pre-election pledges and the government has vowed to press ahead with its plans to push the bill through parliament despite Sunday’s show of discontent.

“It’s not too late,” a defiant Bongibault said. “If there are enough people on the streets the government could change its position.”

Around 900 special buses and five trains are being laid on to bring demonstrators from across the country into Paris and around 40 French nationals are expected to make the journey from London to add their voices to protest.

One of those due to cross the Channel is Damien Fournier Montgieux.

“If we do nothing now then we cannot complain if the law is passed,” he told The Local. “We do not want same-sex marriage in French society.”

Organisers have been reluctant to put an estimate on the potential turn-out but it expected to be in the hundreds of thousands.

Sunday’s rally will see three separate processions converging on the Champs-de-Mars near the Eiffel Tower from their starting points at Porte Maillot, Place d’Italie and Denfert Rochereau. Marchers have been asked to come dressed in blue, white and pink.

A rival demonstration against gay-marriage will also be staged in Paris by the right-wing Catholic organisation Civitas, which has refused to join forces with Manif pour Tous whom it accuses of ‘normalising’ homosexuality.

France’s religious leaders from the Jewish and Muslim communities have said they will not be taking part. Cardinal Andre Vingt-Trois, head of the Catholic Church here, has said he will go to greet protesters but not take part in the march himself.

There will also be similar marches in cities across France and a sister rally has even been organised for London, where around 100 people are expected to show up in-front of the French embassy.

Organiser Morgane De Salvage told The Local it was important for French people in London, who were unable to travel to Paris, to send a message to the government back home.

“Most French people living in London will be unable to get to Paris but they want to show their concern regarding the government bill,” De Salvage said.

“We want to defend marriage and the right for children to grow up with a mum and a dad.”

According to Reuters support for gay marriage in France has fallen from around 65 percent to the mid to low 50s in the latest polls, while the number of those backing adoption rights has slid below 50 percent.

But the opinion polls and Sunday’s mass demonstrations do not worry some members of France’s gay community.

“I have no doubt the law will be passed,” Nicolas Gougain, from the gay-rights group Inter LGBT told The Local. “Obviously there will be a lot of people of Sunday but I am quite calm.

“We too are ready to mobilise in support of the bill.”

Inter LGBT will be one of a number of gay-rights groups who are set to take part in a pro-gay marriage rally on January 27, two days before the French parliament is due to debate the bill.