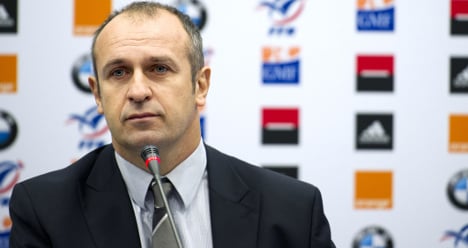 The Stade Francais forward, capped 45 times for his country, was handed the skipper's role for France's November Test matches after Dusautoir was rested to fully recover from injuries.

The French won all three games under his captaincy against Australia,Argentina and Samoa – and that was enough to convince Saint-André to stick with Papé despite the return of Dusautoir.

Dusautoir has captained France 31 times in 54 appearances, most notably atthe 2011 World Cup in New Zealand where France reached the final and he was named international player of the year.

In announcing a 33-strong squad, Saint-André also handed a return to the international scene to powerful Toulon centre Mathieu Bastareaud, who has been out of favour since the win over England in March 2010.

Elsewhere, Saint-André largely stuck with the group that he used in the November Tests, with the only uncapped player being 22-year-old Perpignan lock Romain Taofifeuna.

The squad will be cut to 23 players on January 28 with France playing their Six Nations opener against Italy in Rome on February 3.

The France squad for the Six Nations tournament: