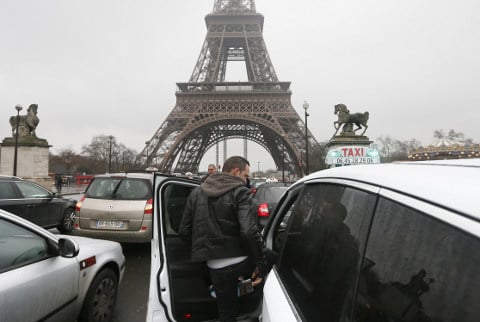 A Parisian taxi driver gets back into his car during protests on January 10th. Photo: Kenzo Tribouillard/AFP

The protest hit traffic to and from the two main airports in Paris, Charles de Gaulle and Orly, and was to culminate near the Eiffel Tower.

Thousands of taxi drivers lined up in a single file on roads, creating logjams across the country. There was a seven-kilometre (four-mile) bottleneck on a highway linking the southern port city of Marseille to Lyon in the east.

The protest by taxi associations targets government reforms on medical transportation that they say will hurt their business and what they say is unfair competition from chauffeur services, which are estimated to run 10,000 vehicles, and motorcycle taxis.

"It is regrettable that in France, we are obliged to take these kind of actions which punish everyone simply to get the government's attention," said Alain Griset, the head of the national taxi drivers' union (UNT).

The UNT said about 5,000 taxis are set to converge in the posh Paris quarter of Trocadero, opposite the Eiffel Tower, the most visited site in the city.