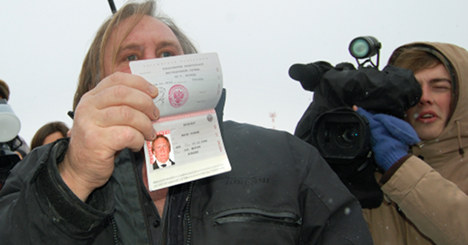 Costumed women greeted Depardieu with folk dancing on the tarmac as he arrived in the capital Salansk and was served blini, or traditional pancakes.

The eccentric star, a multi-millionaire and a household name in France with nearly 170 films to his credit, was seen on Russian television showing off his new red passport.

Among the gifts the star of "Cyrano de Bergerac" – which earned him an Oscar nomination – and "Green Card" received in Mordovia were a pair of felt boots, or valenki, and two kittens for his new Russian home, television said.

Saransk, with a population of some 300,000, is about 600 kilometres (370 miles) southeast of Moscow in a snow-covered region known for Stalin-era Gulag labour camps.

Mordovia governor Vladimir Volkov suggested that Depardieu could select an apartment or a place to build a home in Mordovia, Interfax reported.

To benefit from the Russian tax rate of 13 percent – compared with a proposed 75 percent for those earning more than one million euros ($1.3 million) in France — Depardieu, 64, would have to spend at least six months of the year in Russia.

He is reportedly selling his historic Paris mansion amid reports of a €50 million price tag. Depardieu also has extensive business interests, including wine estates and three restaurants in the centre of Paris.

On Saturday, when he picked up his passport, he met President Vladimir Putin at the strongman's sumptuous Black Sea dacha in the resort town of Sochi.

TV footage showed the pair hugging each other and sharing friendly banter over a meal.

Mordovia on the other hand is famous for its harsh climate and a large number of prison camps, which appeared in the 1930s as part of the Stalin-era gulag system of forced labour camps.

Nadezhda Tolokonnikova, a member of Pussy Riot punk band, is serving her two-year prison sentence in Mordovia, after she and her band mates performed an anti-Putin song in a church last year.

On Sunday a French journalists union called on Depardieu to press his "friend" Putin to shed light on the deaths of more than 20 journalists in Russia in recent years.

"Since you are the friend of the president of this great democracy, the SNJ-CGT would be grateful if you could ask him about the actual progress of investigations into the killing of journalists," the union said in an open letter to the actor.

It also asked him to ask Putin "why the television channels are entirely under his thumb, why some of our counterparts are in jail and why news websites are regularly harassed whenever they publish reports that bother your friend and his entourage."

Depardieu had gushed in a letter published Thursday that Russia was a "great democracy".

The actor has been a huge star in Russia since the Soviet era and still enjoys cult status among many movie buffs.

Also Sunday, around 200 people formed a human chain in a French zoo to call for a reprieve for two ailing elephants whose death sentence has led Brigitte Bardot to threaten to follow Depardieu into exile in Russia.

The two elephants face being put down because they have been diagnosed with tuberculosis and deemed a threat to the health of other animals and visitors to the zoo.