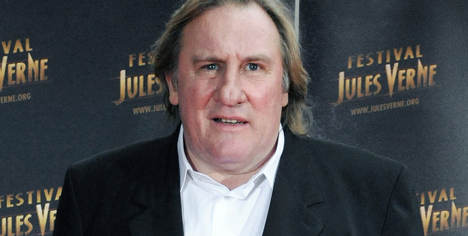 The decision appears to give Depardieu, a frequent guest of the Moscow celebrity circuit, the right to pay the relatively low 13-percent tax rate levied in Russia on everyone from tycoons to the poor.

After the Kremlin issued a statement saying Putin had signed a decree granting Depardieu citizenship, the movie star confirmed that he had applied for a Russian passport and said he was "pleased" to have been granted citizenship.

"Yes, I filed a passport application and I am pleased that it was accepted. I love your country, Russia – its people, its history, its writers," the actor said in an open letter broadcast on Russian TV station Pervyi Kanal.

"I have also spoken to my President, François Hollande. I told him all of this. He knows that I really like your President, Vladimir Putin and that this is reciprocated."

He went on to call Russia a "great democracy" which was "not a country where the prime minister treats a citizen shabbily."

Kremlin spokesman Dmitry Peskov said Depardieu was being rewarded "for his contribution to Russian culture and cinema."

The development was the latest in a highly publicised row between Depardieu and French authorities over their attempt to raise the tax rate on earnings of more than one million euros ($1.3 million) to 75 percent.

The actor and French President François Hollande discussed the issue on Tuesday, Hollande's office confirmed, while declining to reveal details of the conversation.

But Arnaud Frilley, a friend and business associate of Depardieu, told RTL radio: "It is not the fiscal aspect that revolts hims, but really the kind of 'we spit on those who succeed, who take initiative'. At some point you just get fed up."

The Kremlin's announcement looked more like a jab at the West by Putin – keen to show off Russia's more business-friendly approach to taxes – than an actual effort to lure a global celebrity to Moscow.

French government spokeswoman Najat Vallaud-Belkacem said the decision was the "exclusive prerogative of the Russian head of state" and did not merit further comment.

Depardieu said on Sunday that a move by France's Constitutional Council to strike down the proposed 75 percent tax rate changed nothing in his much-debated decision to move out of France.

The French Socialist government has vowed to push ahead with the tax and propose a new measure that would conform with the constitution.

Putin at his end-of-year press conference in December surprised many by saying he was ready to offer the 64-year-old veteran French actor a Russian passport to resolve the row.

"If Gérard really wants to have a residency permit in Russia or a Russian passport, we can consider this issue resolved positively," Putin said at the time.

Putin added that the French premier's famous remark about Depardieu being "pathetic" for threatening to leave the country had hurt the star's feelings and may eventually force him to move.

"An artist is easy to offend," Putin remarked.

Depardieu had mentioned moving to Belgium – home of a 50-percent tax on the very rich – and purchased a new home there near the French border for the specific purpose of avoiding the higher French rate.

A senior Belgian official said Thursday that if the star pursued his stated intention to obtain Belgian nationality, that bid could be affected by him taking Russian nationality.

The hulking actor has been a huge star in Russia since the Soviet era and still enjoys cult status among many movie buffs.

France was considered by the USSR as one of Europe's friendlier countries, with natural socialist leanings – a status that made its movies a staple of Soviet silver screens.

Depardieu has since become a frequent jury member of the glitzy Moscow and Sochi film festivals.

His straw hair and rugged features have even featured in local television advertisements for products ranging from kitchen furniture from the central city of Saratov to a brand of ketchup called Baltimore.

And a picture of Depardieu giving the thumbs-up sign still graces the home page of a small Russian bank called Sovetsky (The Soviet).

The charismatic Frenchman was most recently asked to emigrate to Russia by the iron-fisted leader of Chechnya, the scene of two post-Soviet wars that killed tens of thousands.

"I can say for sure that we are ready to welcome the great artist," Chechen leader Ramzan Kadyrov said a day before Putin's first remarks on the subject.

Depardieu this year made a peculiar visit to Chechnya to celebrate the birthday of Kadyrov, a ruler accused of torture and other violent crimes by international rights groups.

A video of that celebration showed Depardieu at one stage shouting in Russian: "Glory to Grozny! Glory to Chechnya! Glory to Kadyrov!"

Depardieu will qualify for the 13-percent tax rate if he spends at least six months in Russia per year.

The tax rate would rise to 30 percent on all income made locally and in other countries if he spends more than half the year abroad.

"People in the West do not know the details of our tax system," senior cabinet member Dmitry Rogozin tweeted on Thursday.

"When they find out, we should expect a mass migration of rich Europeans to Russia."