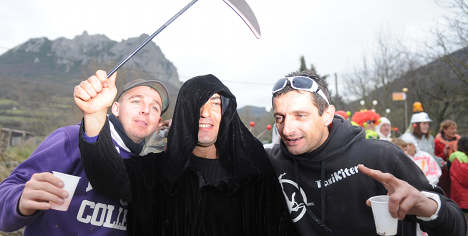 Some of the more peaceful revellers awaiting the end of the world near Bugarach. Photo: Eric Cabanis/AFP

Officials said they believed they were trying to test the security cordon thrown around the village and nearby mountain of Bugarach, where dozens of police were deployed to head off a potential influx of New Age fanatics and sightseers.

On Thursday police also arrested one man with a Taser electric shock device and another with a baseball bat near the village of 200 people, where journalists from across the world have congregated.

Police had wrongly anticipated a mass influx of visitors and blocked access to the village and the Pic de Bugarach, the mountain which some say will open on the last day and aliens will emerge with spaceships to save nearby humans.

Believers say the world will end on December 21, 2012, the end date of the ancient Mayan calendar, and they see Bugarach as one of a few sacred mountains sheltered from the cataclysm.