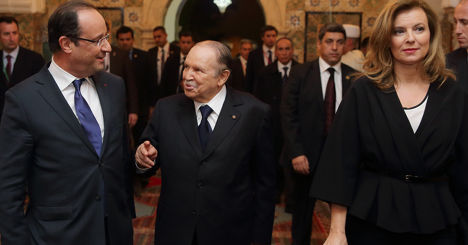 "I have not come here… to offer repentance or apologies. I have come to say what is true," Hollande told a news conference on the first day of his trip to the former French colony.

Responding to a question about Algerian demands for French contrition, Hollande said it was important to recognise the truth about France's colonial past and the tragedies that occurred during the 1954-62 war of independence.

But there must also be a "willingness not to let the past block us but on the contrary to work for the future. Once it has been recognised, the past must allow us to go much faster and much further."

He said he would deliver the same message to Algerian MPs when he addresses parliament on Thursday morning.

Hollande was received with full honours by his Algerian counterpart Abdelaziz Bouteflika as he got off the plane, and a large crowd cheered them as their convoy passed along the capital's historic corniche.

Hollande invited Bouteflika to pay a state visit to France, and called for a "strategic partnership between equals."

But before the visit, 10 political parties including four Islamist groups denounced the refusal of France "to recognise, apologise for and compensate" the crimes committed during 132 years of French colonial rule.

And the popular French-language newspaper El-Watan, in an editorial on Wednesday, called for French recognition of "the colonial past and crimes of colonisation," saying such a move would "soothe memories that are still painful."

The socialist president, who is accompanied by a 200-strong delegation including nine government ministers and around 40 business leaders, is visiting Algeria after a period of lukewarm ties under his rightwing predecessor Nicolas Sarkozy.

His two-day trip to the energy-rich north African country also comes at a time when the French economy is sorely in need of a boost.

Hollande and Bouteflika signed a declaration of friendship and cooperation late on Wednesday.

Another document will detail a five-year work programme in the economic, financial, cultural, agricultural and defence sectors.

Projects to benefit include the construction of a factory by vehicle manufacturer Renault, the operations of French cement group Lafarge and the teaching of French in Algerian schools.

The president said the deal signed for the Renault factory near the western city of Oran is likely to result in assembly of at least 25,000 vehicles a year starting in 2014.

The two countries are bound together by human, economic and cultural ties.

More than half a million Algerians live in France, and hundreds of thousands of others hold French nationality, but many are also frustrated at not being able to obtain visas and seek a better life in Europe.

A poll published by Algerian daily Liberte said 57 percent of Algerians were in favour of a special relationship with France.

It also said that 35 percent of French people believe Hollande should "in no circumstances" apologise to Algeria for the colonial past, against 13 percent who think he should.

On the crisis in Mali, Hollande appeared to soften the hawkish French stance, saying there was a convergence of positions between him and Bouteflika, both agreeing on the need for dialogue to restore the country's unity.

But this process must take place "only with the movements or forces that distance themselves from terrorism, that fight against terrorism," he said.

France has been a key Western backer of the planned deployment of a 3,300-strong African intervention force to drive out Islamists who have seized the northern half of Mali, fearing the Sahel region may become a "terrorist" haven.

But Algeria, the regional powerhouse which shares a vast southern border with Mali, is seen as key to any military operation, and Bouteflika has said he favours "a negotiated political solution."