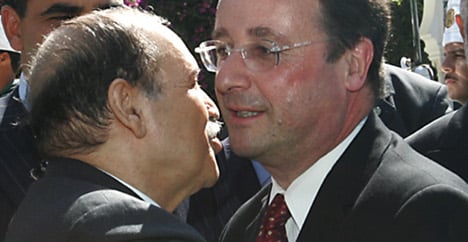 Abdelaziz Bouteflika, President of Algeria, embraces François Hollande, then leader of the French Socialist Party, at a meeting in 2006. Photo: Fayez Nureldine/AFP

Hollande's first trip to the former French territory as president comes after a period of lukewarm ties under his predecessor Nicolas Sarkozy, and in the year that Algeria celebrates 50 years of independence.

But there are high hopes in both countries that the two-day visit will mark a "new stage," as Algeria's President Abdelaziz Bouteflika said in an interview with AFP last week.

Bouteflika, like his French counterpart, is seeking to focus on the future, and called for "a strong and dynamic relationship with France."

He and Bouteflika are due to sign a "joint declaration" – one of 15 planned accords – which is expected to pave the way for extensive future cooperation.

Projects likely to benefit include the construction of a Renault factory – the company says an agreement will be signed on Wednesday – the operations of French cement group Lafarge and the teaching of French in Algerian schools.

The two states are bound together by a network of human, economic and cultural ties, with more than half a million Algerians living in France, and hundreds of thousands of others holding French nationality.

But many remain frustrated at not being able to obtain French visas.

Algeria is an important supplier of oil to France and France is its top trade partner, while for Paris, Algiers is a key partner in the fight against armed Islamists in the Sahel.

But France's presence in the Algerian market has met stiff competition from other countries, including Italy, the United States and China, while Paris and Algiers have very different approaches to the ongoing crisis in Mali.

Meanwhile, the past still casts a long shadow over France's links with Algeria.

Ahead of the visit, political parties, including four Islamist groupings, have denounced "the refusal of the French authorities to recognise, apologise and compensate, materially and morally, the crimes committed by colonial France in Algeria."

They accuse their own government of "indulgence" for not insisting on it.

Hollande in October recognised the "bloody repression" of Algerian protesters by police in Paris in October 1961, which historians say killed dozens, possibly hundreds, but he is unlikely to go much further during his visit.

His aides say he is prepared to take a lucid look at the past, while not taking the road of official repentance, an issue that is likely to arise on Thursday when he addresses the Algerian parliament.

Rights groups have also urged Hollande to press the Algerian authorities on respecting human rights, saying that since the announcement of reforms in April 2011 the repression of rights activists has gotten worse.

Another major issue Hollande will tackle during his Algeria trip is Mali.

The west African regional bloc ECOWAS wants to deploy a 3,300-strong force to drive out Islamists who have seized half the country, and France is a key Western supporter of the plan, fearing the zone may become a "terrorist" haven.

Algeria, the regional powerhouse which shares a vast southern border with Mali, is seen as key to any military operation but Bouteflika has said he favours "a negotiated political solution." 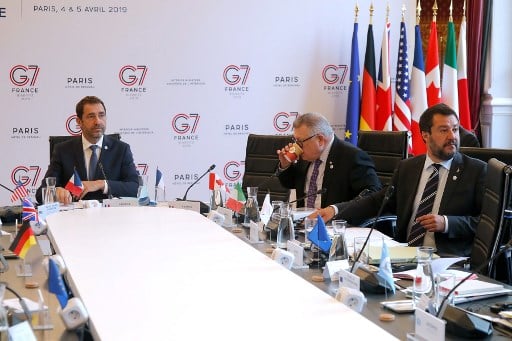