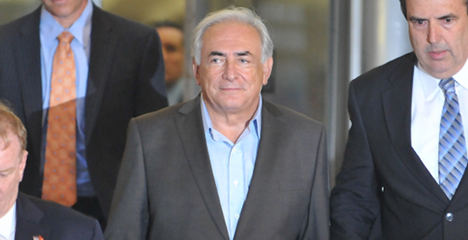 Lawyers for the disgraced politician said they would appeal the court's decision.

"Mr Strauss-Kahn's defence is certain that he will ultimately be cleared of the absurd charges of pimping that have been made against him," they said in a statement.

The setback for Strauss-Kahn came a week after he agreed a financial settlement with a New York hotel maid who had accused him of sexual assault in a case that forced him to resign from his IMF job and wrecked his chances of becoming French president.

Details of the settlement were not disclosed but legal experts said Strauss-Kahn would have been required to pay Nafissatou Diallo several million dollars over her allegation he had jumped on her naked and forced her to perform oral sex.

Strauss-Kahn admitted a sexual encounter took place in the Sofitel hotel in May 2011 but insisted it was consensual.

A criminal investigation into the incident collapsed after Diallo changed her version of events, prompting the prosecution to conclude there was little chance of a conviction.

French prosecutors however are convinced they have a case against Strauss-Kahn for "aggravated pimping in an organised gang".

Among Strauss-Kahn's fellow accused is Jean-Christophe Lagarde, a police commissioner, and René Kojfer, the former public relations officer at the Carlton.

Lawyers for Lagarde and Kojfer have claimed their clients have been caught up in a political witch-hunt against Strauss-Kahn, arguing that there would have been no probe but for his involvement.

The Carlton case is one of a series of investigations that were launched in the aftermath of Strauss-Kahn's arrest in New York.

French writer Tristane Banon accused him of trying to rape her in 2003.

Investigators concluded that while there was evidence of sexual assault, the alleged attack had occurred too long ago to be prosecuted.

Strauss-Kahn was also investigated over an allegation that he had taken part in the gang rape of a Belgian prostitute. That was dropped when she recanted and said she had consented to sex.

Prior to his six-minute encounter with Diallo in New York, DSK, as he is known in France, had looked certain to secure the Socialist Party's nomination as their candidate for the 2012 presidential election.

As it was, Strauss-Kahn's fall from grace cleared the way for party insider Francois Hollande to claim the nomination and he went on to comfortably defeat the incumbent Nicolas Sarkozy.

Strauss-Kahn meanwhile was left to pick up the pieces of a shattered life. His third wife, Anne Sinclair, stood by him in the immediate aftermath of his New York arrest but left him this year.

Sinclair, a wealthy heiress and former newsreader on French TV, was reported by Le Monde to have provided her former partner with some of the money he needed to pay off Diallo.