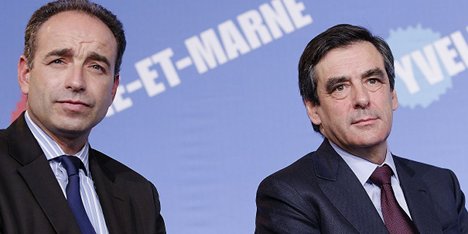 After a month of bitter recriminations, Jean-François Copé, who won last month's hotly disputed leadership battle, appeared Sunday to have accepted the new vote after a telephone conversation with his rival, former prime minister François Fillon.

Previously, Copé had refused any fresh vote before the 2014 local elections.

Copé's camp told AFP that Copé had made the concession in a bid to calm the damaging row. The September 2013 date would fall mid-way between the March 2014 vote he had initially wanted and the March 2013 deadline Fillon had set.

The question of dates had been the major blocking point in the battle between the two camps.

It leaves the way clear to negotiating the reunification of the party in parliament. Last month, Fillon created his own parliament group, dubbed the Rally for the UMP (R-UMP), depriving the UMP of 68 of its 194 deputies.

Talks to settle that matter were set for Monday, sources in both camps said.

Copé told AFP Sunday he was confident he could reach an agreement with Fillon.

"The problem of the calendar for a new election was the last sticking point between us," he said.

"The mediation of (former prime minister) Jean-Pierre Raffarin allowed us to advance in a very positive manner," he added.

Once the two sides had settled the other issues, he added, Fillon's R-UMP would begin the process of dissolving itself, "as that has always been the understanding," he added.

In the meantime, he would stay on as president of the party, he said.

"Not everything has been settled but there has been real progress," said Fillon's spokesman, Jerôme Chartier.

Fillon issued a statement welcoming Copé's willingness to agree to the September vote. He too said that the two factions of the party could be reunited once they had finalised their negotiations.

The deal between the two rivals appears to have headed off a referendum planned for Tuesday of UMP deputies and senators on the question of whether there should be a fresh leadership vote before next summer.

Both leaders would like to see the UMP united before the next parliamentary session opens, on January 15, so as to present an effective opposition to the government of Socialist President Francois Hollande.

Late Sunday the two protagonists welcomed the UMP's "grand slam" in three by-elections, winning one seat from the Socialists and holding two, with Copé seeing a "good omen for escaping from the crisis" in the party.

Sources close to ex-president Nicolas Sarkozy have said he was infuriated by the deadlock after the November 18 UMP election that was marred by allegations of irregularities and ballot-stuffing.

The UMP, the political heir to the movement founded by Charles De Gaulle after World War II, has been on the verge of collapse over the bitter and very public dispute between Copé and Fillon.

Both Fillon, 58, and Cope, 48, are fiscal conservatives advocating free-market policies and economic reforms, but Cope has carved out a niche on the right of the UMP with his tough-talking approach to immigration and Islam.

Sarkozy has no official post in the UMP after his defeat in the May presidential election to Hollande.

But he is anxious to keep the UMP together in case he decides to make a comeback bid for the presidency in 2017.