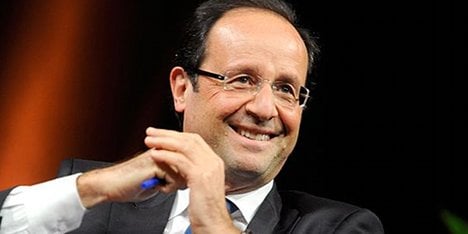 Valérie Trierweiler, the president's 47-year-old partner, is suing the authors of "La Frondeuse" (The Rebel) for defamation and invasion of privacy, seeking €85,000 ($110,000) in damages and court costs.

As the trial was set to open on Monday, it emerged that Hollande sent a letter to the court denying an assertion in the book that he had reached out the right in the mid-1990s.

Hollande, 58, denounced as a "complete fabrication" the book's claim that he had sent a letter in 1994 to former right-wing prime minister Edouard Balladur.

"The separation of powers has been violated. The president is the guarantor of judicial independence. This is unbelievable," said Olivier Pardo, the lawyer for the book's two authors.

The right-wing opposition UMP also expressed its "amazement" at the letter, which it said "can legitimately be considered a means of putting pressure" on the court.

The letter mentioned in the book was allegedly given to former right-wing minister Patrick Devedjian.

The book, written by television journalists Christophe Jakubyszyn and Alix Bouilhaguet, claims Trierweiler had an affair with Devedjian early on in her relationship with Hollande.

At the time she was still married to her second husband and Hollande was still officially with one-time presidential candidate Ségolène Royal, the mother of his four children.

Hollande's complicated private life has been the source of frequent speculation and a slew of publications since he came to power in May.

Interior Minister Manuel Valls also wrote to the court saying comments he made to the authors had been distorted and taken out of context. Pardo said the letter had been written on ministry letterhead.

Trierweiler is also seeking 70,000 euros in damages from magazine Point de Vue, which in early October published an interview with the authors.