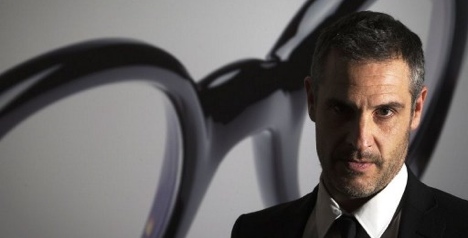 Four decades after the trade in tortoiseshell was banned under the 1973 CITES convention, the fourth-generation family firm sees itself as custodian of a rare craft, fashioning made-to-measure spectacles from stocks amassed before the ban.

Maison Bonnet describes its customers — among them Audrey Hepburn, Maria Callas or presidents François Mitterrand and Jacques Chirac — as "aesthetes" more concerned about style, the timeless kind, than fashion.

Christian Bonnet, who learned the trade from his father and grandfather, holds the rank of "maitre d'art", an honorific title granted by France's culture ministry and currently held by just over 100 craftsmen nationwide.

Today, jointly headed by Christian and his sons Franck and Steven, Bonnet turns out around 100 pairs of hand-made tortoiseshell glasses per year for prices ranging from 3,500 to 30,000 euros.

"My father didn't want me to go into the trade, because of the problem with tortoiseshell supply," produced mainly from the shell of the endangered hawksbill turtle, Franck Bonnet told AFP.

With 12 grammes of tortoiseshell needed for one pair of glasses, the firm says it uses around two to three kilos of the stuff per year.

Declared part of French national heritage in 2007, Bonnet will not say how much stock it holds, but the supply is finite.

"It is inconceivable that we would ever fish another turtle out of the ocean," says the 41-year-old, himself a staunch environmentalist.

So he decided a few years ago it was time to look to the future — and to a wider market.

"I said to my father, 'You are the last tortoiseshell craftsman, but you are also the last hand-made eyewear maker. If we could only use more readily available materials, maybe I can keep our craft alive?'"

Tortoiseshell aside, the dozen workers at its Paris boutique and workshop in Sens, a few hours southeast of the capital, now produce some 700 pairs using new materials.

The next step towards broadening what they offer is to come from customization — allowing people to change the size and colour on standard models.

Franck Bonnet says he loves watching Japanese tourists inspect his wares, and is mulling opening a boutique in Tokyo.

"They go over every last detail. You know you haven't put the effort in for nothing!"

Bonnet was snared in controversy recently when a star journalist, Audrey Pulvar — then in a relationship with a Socialist minister — was outed for wearing a pair of their steeply-priced glasses.

In other words, almost an entry-level model.

"It's true it is costly," Bonnet said. "But we artisans are not millionaires, this kind of high craft is extremely time-consuming."

"How high your ears are, the shape of your nose — all have an incidence on the tilt of the lenses, and therefore on how well you see," he explained.

And that is before all the different steps of shaping and polishing the frame.

"You can spend a crazy length of time on a pair of spectacles, redoing them two, three, five times to get them exactly right.

"What costs money is not marketing, it's what goes on the client's nose!"