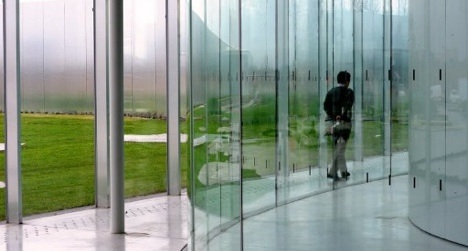 View of one of the buildings at the Louvre-Lens (Photo: Philippe Huguen/AFP)

Greeted by a group of former miners in overalls and hardhats, President François Hollande inaugurated the Japanese-designed glass and
polished-aluminium branch of the Louvre in the northern city of Lens.

Officials hope the museum, set to host masterpieces by Delacroix and Raphael for its first year, will help revive a region blighted by the closure of its last coal mines 20 years ago and with unemployment at a stubbornly high 16 percent.

"We know that a museum does not bring spring," regional council chief Daniel Percheron said.

"But it is a sign at least of the end of winter."

Just one hour by train from Paris, the Louvre-Lens hopes to attract 700,000 visitors for its first year, and half a million per year after that, compared to nine million annual visitors for the Louvre itself.

The 150-million-euro ($196-million) project was 60 percent financed by regional authorities in the Nord-Pas-De-Calais region, on the English Channel and the border with Belgium.

The museum's five sober buildings were intended by Japanese architectural firm Sanaa to blend into the former industrial site, with the rail tracks that once linked its pits turned into access roads.

From within its giant glass cube entrance hall, visitors can see the enormous slag heaps at Loos-en-Gohelle, the largest in Europe.

For its first five years, the museum's central gallery will showcase 200 works spanning from Antiquity to 1850.

The museum will open its doors to the public for the first time on December 14th.