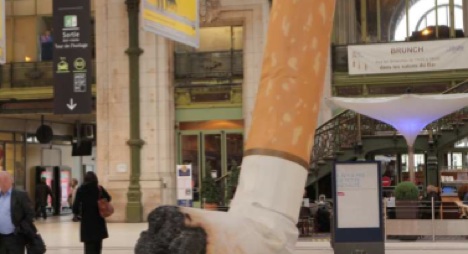 SNCF has mounted giant sculptures of a crushed cigarette butt and chewing gum at Paris's Gare de Lyon as part of its campaign against rudeness (Photo: SNCF)

With on-board incidents of anti-social conduct up 25 percent in a year, SNCF is also extending from the Paris region to the rest of the country a hotline (3117) that enables passengers and staff to report offenders.

Under the crackdown, illicit smoking will be punishable by a 68-euro ($89) fine, plonking muddy shows on the seat opposite could result in a 45-euro penalty and slight damage to fixtures will carry a 144-euro tariff.

The penalties were made public after Guillaume Pépy, SNCF's president, on Monday announced a plan to hire trained mediators to deal with young people to discourage bad manners and incivilities on trains.

The rail company has also secured agreement from the ministry of justice on tougher sanctions for more serious offences, including threatening staff and major vandalism.

Pulling the emergency cord for no reason will notably be liable for a fine of up to 700 euros.

The crackdown is to be accompanied by increased investment in keeping trains clean on the basis that litterers are less likely to despoil a clean carriage than one that is already full of debris.

Passengers will also be urged to be considerate in their use of mobile phones in a poster campaign built around the slogan "There is no such thing as a little rudeness."