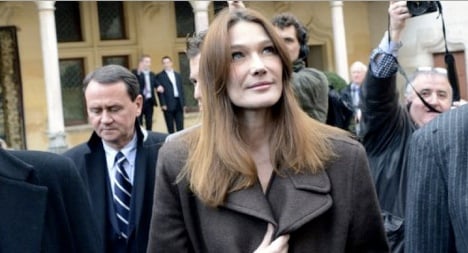 "In my generation we don't need to be feminist," said the former first lady, who is making a public comeback after her husband Nicolas Sarkozy's ouster from power and who guest edited the Christmas issue of the style magazine.

"There are pioneers who paved the way for us," the ex-first lady said.

"I am not a feminist activist at all," she said.

"On the contrary, I am a true bourgeoise," confided the model, singer and mother-of-two.

"I love family life and doing the same thing every day."

Her remarks sparked a deluge of reactions on Twitter, with a French feminist group "Osez le feminisme!" spearheading the assault, inviting people to respond to Bruni under the "hashtag" #ChereCarlaBruni (Dear Carla Bruni).

Playing on the fact women still earn a quarter less than men in equivalent jobs —  one user @LindaRamoul retorted: "My generation needs feminism because I am on sale for a 27 percent discount all year round."

The French senator Laurence Rossignol (@laurossignol) also weighed in, tweeting: "For as long as I get asked if I am the senator's assistant, the coming generation will need feminism."

"Eighty percent of housework still carried out by women," came the one-liner from @Maman_Travaille.

And a mother, @MaggiAnT, wrote that "We will need feminism for as long as my son gets laughed at for saying he wants to be a midwife."

"We need everyone to be feminist," summed up government spokeswoman Najat Vallaud-Belkacem, who is also the women's rights minister, when questioned on Europe 1 radio about the row.

"Feminism is about equal rights, not about one gender dominating the other."