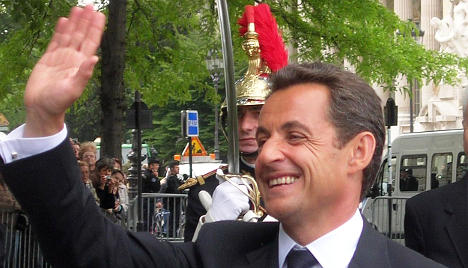 The UMP, the political heir to the party founded by Charles de Gaulle after the Second World War, is in turmoil after accusations of vote-rigging tarnished a leadership vote pitting former prime minister Francois Fillon against hardline rival Jean-Francois Copé.

At a peacemaking lunch Monday with Fillon, Sarkozy said holding a new vote would "avoid an escalation of the conflict", a party source told AFP — an account confirmed by both Fillon and Copé loyalists in the party.

Still reeling from its loss of the presidency and parliament this year, the UMP is facing the spectre of an unprecedented split as both rivals have refused to back down in the increasingly angry dispute.

The ridicule foisted on the party over the leadership debacle has done serious damage to its image, benefitting Socialist President François Hollande as he struggles with a flat economy and dropping popularity.

Some UMP deputies were already raising the prospect on Monday of breaking away from the party's parliamentary faction —  a move that would deprive it of crucial public funding.

Sarkozy flew in early Monday from a conference in Shanghai for his lunch with Fillon, which lasted more than hour in Sarkozy's office in central Paris.

A party heavyweight who earlier failed in a mediation bid had urged Sarkozy — still enormously popular with the UMP rank-and-file despite his loss to Hollande in May's presidential vote — to intervene.

"Clearly (Sarkozy) is the only one today to have enough authority to propose a way out," former foreign minister Alain Juppé told RTL radio.

Fillon, 58, and Copé, 48, have traded accusations of fraud and ballot-rigging since last Sunday's election for a party president ended with
Copé ahead.

A party appeals commission on Monday confirmed Copé's win, raising his margin of victory from 98 votes to nearly 1,000 following an examination of complaints over alleged irregularities.

Fillon's camp has accused the commission of bias and said he will pursue legal action including a civil suit to have the results overturned.

"Once again Jean-Francois Copé has had himself declared president (of the UMP) by a coup," Fillon said after the commission's ruling, calling its decision "illegal" and saying it had "no guarantee of impartiality".

Speaking at UMP headquarters, Copé called on the party to choose "forgiveness over division" and "the future over bitterness".

He said the party needed Fillon and urged him to join a proposed team for reconciliation.

The UMP's opponents on both the left and far-right have watched with glee as the party implodes, with some already writing its obituary.

"The UMP no longer exists. The UMP is dead," Marine Le Pen, the leader of the far-right National Front, gloated on Monday.

Fillon was to bring together his supporters in parliament early Tuesday, with many clamouring to break away from the UMP if Copé remains leader.

Such a move would strip the UMP of the 42,000 euros in annual funding it receives for each of its members in the lower-house National Assembly and upper-house Senate.

Lawmakers have until Friday to declare their party affiliation for next year's funds.

The UMP has 183 members in France's 577-seat National Assembly, the second-largest group after the Socialists.

Polls show the overwhelming majority of French voters and UMP supporters would like to see the party run the election again, but Copé has rejected the idea.

Both men are fiscal conservatives advocating free-market policies and economic reforms, but Copé has carved out a niche on the right flank of the UMP with his tough-talking approach to immigration and Islam.