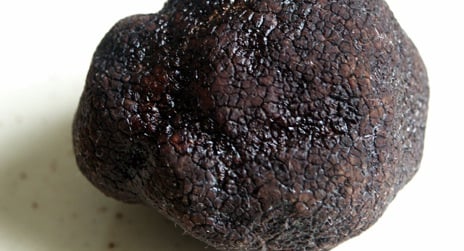 Trufflers have long suspected that global warming is affecting Tuber melanosporum — dubbed "the black diamond" on account of its colour and extraordinary price — in its native habitat in southwestern France, Spain and Italy.

A century ago, French trufflers notched up a harvest that, according to legend, reached 1,000 tonnes in a year.

In a letter to the journal Nature Climate Change, Swiss scientists said they now had clear data that drier summers were to blame, as this affected the oak and hazelnut trees on which the prized fungi grows, a process known as symbiosis.

The team found that harvests in France's Périgord and in Spain's Aragon region fell at roughly the same pace from 1970-2006, and this trend was in line with an overall decline in summer rainfall.

Harvests in northern Italy's Piedmont and Umbria also retreated, but not as badly as in France and Spain, and this correlated with relatively higher levels of summer rain in those regions.

Harvesting of the black truffle, also called the Mediterranean truffle, is restricted to the months between November and February.

However, the success of the yield depends on the summer's weather, explained Ulf Buentgen and Simon Egli from the Swiss Federal Research Institute, or WSL.

Truffles thrive in wet and cold conditions and hate dryness and heat.

"Given the symbiotic fungi-host asssociation, we postulate that competition for summer soil moisture . . . might be a critical factor for truffle fruit body production, particularly in semi-arid environments," they said.

Their theory, they added, is borne out by research in Spain, which found that oak tree growth depends overwhelmingly on rain between May and July.

The letter suggests that the future for the black truffle may lie in Germany and Switzerland if temperatures in southern Europe climb by at least two degrees Celsius (3.6 degrees Fahrenheit) this century, as many climate simulations predict.

Forest systems north of the Alps will be slightly warmer but not drier, according to these computer models, which could make them a more suitable home for both natural and cultivated truffles.

The prediction coincides with a remarkable surge in fungi in Switzerland and Germany, including the paler but less perfumed Burgundy truffle (Tuber aestivum).