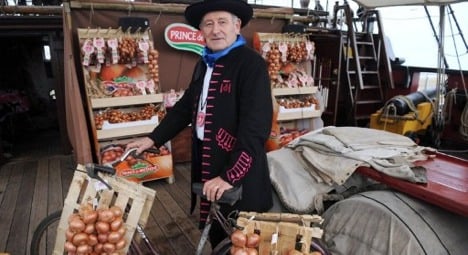 François Seite aboard ship with his onions (Photo: Fred Tanneau/AFP)

Beset by tough market conditions at home, the producers of Brittany's celebrated pink onions have decided it is time to seduce a new generation of British housewives with their Gallic charm and strings of eye-watering produce.

The Etoile du Roi (Star of the King), a replica of an 18th-century sailing ship, on Monday set off from the Breton port of Roscoff, weighed down by a hefty cargo of onions that it will deliver to London on December 6th after stopovers on the Channel island of Jersey and at Portsmouth, on England's southern coast.

It was from Roscoff in 1828 that the first French onion salesman to try his luck in England set sail, the trip across the Channel being far shorter and less hazardous than an overland journey to the markets of Paris.

Having returned with tales of how quickly he had sold his cargo, he established a tradition that was to continue well into the 20th century, according to François Seite, a former salesman himself who is now the president of the local 'Johnnies' association and Chamberlain of the Confraternity of the Onions of Roscoff.

"From Roscoff to Plymouth, it is the same as Roscoff to Rennes (in southern Brittany), except that there is the Channel in between them," explains the 72-year-old former farmer who, like his father and grandfather, spent years on the highways and byways of England, first by bicycle then with a little van.

In the 1920s and 1930s there were as many as 1500 French onion pedlars who regularly travelled from Brittany to England, Wales and even Scotland, selling their merchandise door-to-door.

So many of them had the Breton first name Yann, they quickly became known as 'Johnnies,' and the image they created of a Frenchman with a string of onions around his neck, sporting a beret and a traditional stripey top has proved indelible.

As well as the four tonnes of onions on board the Etoile du Roi, another 20 tonnes of Roscoff Onions are being dispatched to England by Brittany Ferries, a company established in 1972 by Breton farmers precisely in order to provide the remote region on the western edges of France with access to the British market.

"Our geographical isolation from the rest of France and Europe makes it hard for us and in these tough times, not trying to find alternative outlets for our produce would be suicidal," said Jean-François Jacob, the secretary general of the local agricultural cooperative.