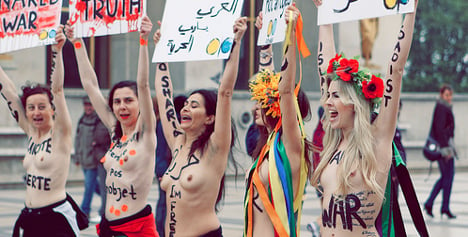 Catholic group Civitas is suing the group Femen for “sexual exhibitionism” in front of children, as well as protesting illegally and insulting a religious group by mocking their appearance.

The feminist protesters turned up to the march against the proposed marriage for all law wearing only knickers and stockings, and with graffiti criticising the march written on their bodies.

They also fired canisters of tear gas at the marchers.

Some members of the feminist group were attacked and injured by the marchers. Five people have since been arrested in connection to the violence.

Alain Escada, the president of Civitas, said the catholic group would also be suing Femen for spreading a message in a violent manner, organised violence with arms and threatening the freedom to protest of others.