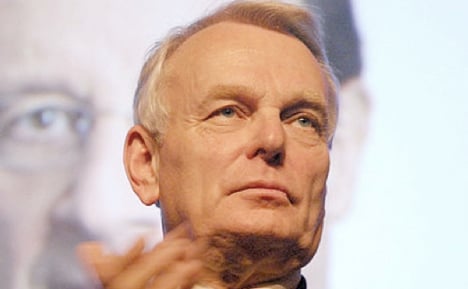 The visit by Jean-Marc Ayrault, a fluent German speaker making his first official visit to France's neighbour since taking office in May, came amid tension over economic policy between Europe's power couple.

Addressing business leaders earlier, Ayrault said the return of growth and battling unemployment were his government's "only compass" and vowed to press on with reducing the public deficit.

"From 2012 the deficit will be reduced to 4.5 percent of GDP, whereas if nothing had been decided from this summer it would have reached 5.0 percent," he said.

EU rules stipulate that member states must keep their budget deficits within three percent of output.

The government has unveiled measures designed to make the economy more competitive, including tax breaks for businesses worth up to 20 billion euros ($25.5 billion) a year.

"We want a strong France, as France would like also a strong Germany, so that we become an overall strong Europe," Merkel told a joint press conference with Ayrault who kicked off speaking in German.

"And everyone is working on that, and that is important, that is good, and I truly wish great success for what is now getting underway in France," she said.

"The German chancellor is convinced (…) that the French government is working to restructure our economy to turn France into a strong France," he said.

"As she said Europe needs a strong France," he added.

Hours before the visit, growth data from Europe's two top economies underscored the urgency of restoring effective leadership out of the financial crisis that has buffeted the eurozone for three years.

Under former French leader Nicolas Sarkozy, the Franco-German duo spearheaded much of Europe's response to the debt crisis, outlining plans before every EU summit and often holding joint news conferences in Brussels.

However, since the election of new Socialist President Francois Hollande, ties between the two have noticeably cooled.

The pair have also differed on the best solution to the eurozone debt crisis, with Hollande pushing for measures to bolster growth in the bloc while Merkel wants debts to be tackled first before stimulating the economy.

The panel and the German government quickly denied they had any such plans.

Standing next to Merkel, Ayrault told reporters that no single model of economic success existed but expressed admiration for Germany's "quality of social dialogue".

"There's no model — there are good practices, those which work here, those which work there," he said when asked if steps taken by France to boost competitiveness were inspired by German labour market reforms.

"One aspect that inspires me is the quality of social dialogue in Germany," he added.

"What's very important is that each of us takes the trouble to understand the other," he said.

And Britain's Economist magazine meanwhile carried a 16-page cover story in its edition to be published Friday on how France was "the time bomb at the heart" of the eurozone debt crisis.

In this regard Ayrault told France i-Tele he was positive that the German government had no role in the "press rumours" that alleged Berlin was alarmed about economic developments in France.

"France must not overrate what is written by some newspapers, and not by the entire German press," he said.

"This visit is important to remove all ambiguity, but there isn't any ambiguity," Ayrault said here earlier.

"There have recently been some articles in the German press but they do not correspond to political reality."