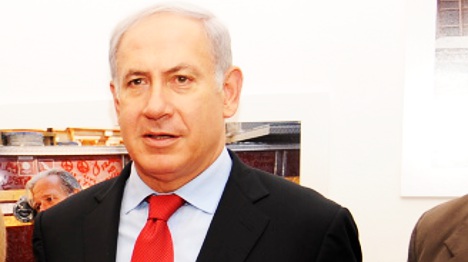 "Netanyahu came to France to campaign and we knew that," Hollande told journalists in private remarks at the weekend which were later leaked by satirical weekly Canard Enchainé.

The two leaders last Thursday attended a highly emotional service for a rabbi and three Jewish schoolchildren shot dead by Al-Qaeda inspired killer Mohamed Merah on March 19 in the city of Toulouse.

Hollande said the Israeli prime minister, who faces legislative polls in January, had hijacked the event.

"Since I was there, he toned down his speech but it wasn't good to transform this ceremony into an electoral meeting," he told the journalists, including AFP, in the private conversation. "It wasn't appropriate."

Netanyahu had compared the gunman to Nazis and warned that Israel could defend its people from those "who want to erase us from the map," ending his speech with the slogan "Israel will Live!"

Netanyahu enjoyed close ties with Hollande's right-wing predecessor Nicolas Sarkozy until a G20 summit in November last year when he branded the Israeli leader "a liar" in a private conversation with US President Barack Obama.

"I cannot bear Netanyahu, he's a liar," Sarkozy said, unaware that the microphones in their meeting room had been switched on.

Obama, according to the French interpreter, replied: "You're fed up with him but I have to deal with him even more than you."