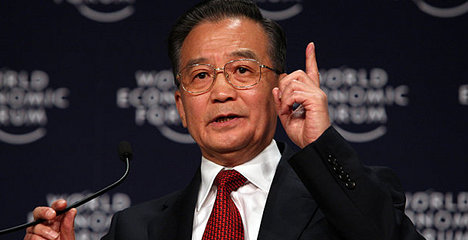 "There is a doubt in Asia about Europe's capacity to be a zone of stability and growth," he told reporters aboard his flight to the meeting of dozens of leaders from Asia and Europe in the Laos capital Vientiane.

He said the main aim of his first trip to Asia since taking office in May was to "convince (participants) during the Europe-Asia dialogue that Europe is still an economic power".

Hollande, along with fellow leaders including Italian Prime Minister Mario Monti and European Commission chief Jose Manuel Barroso, will seek to reassure Asia that the long-running eurozone crisis is finally coming under control.

The diplomatic offensive is seen as a sign of the growing importance that debt-laden Europe places on Asia's fast-growing economies.

Hollande, who flew into Vientiane early Monday, was due to hold bilateral talks with leaders including Chinese Premier Wen Jiabao during his one-day visit to small landlocked Laos.

European leaders may lobby Wen to deploy some of Beijing's trove of about $3 trillion in foreign exchange reserves – the largest in the world – to invest in EU bailout funds.

China "remains confident in the euro and that's important", said an official in Hollande's delegation.

The Asia-Europe Meeting, held every two years, provides an opportunity to boost trade links between two regions that together account for about half of global gross domestic product.

"We have to go and look for growth where it is, and growth is also in Asia," the official said.