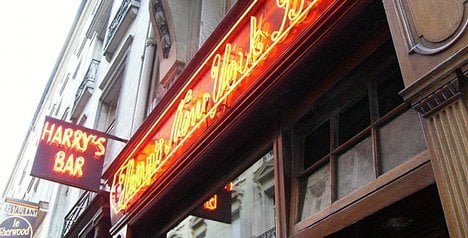 The birthplace of the Bloody Mary and the haunt of the likes of Ernest Hemingway and Francis Scott Fitzgerald, Harry's New York Bar – a small corner of Manhattan in the heart of Paris – is the best election soothsayer, its owner said.

"We are the most dependable opinion poll," said Isabelle MacElhone with a wink, speaking of the more that 100-year-old institution.

The only two failed results were the 1976 election won by Jimmy Carter and George W. Bush's 2004 victory.

The venerable establishment started the daily straw votes for this election in October, with only Americans allowed to take part.

A weekly count is conducted and on election day next Tuesday, before the votes in America are tallied, Harry's releases its own results.

The latest count based on 165 votes cast so far has Obama leading against Romney by 32 votes.

"We ask Americans to show us their passports," she said. "Then they are given voting papers."

Their names and details are listed in a notebook and checked to see there is no multiple vote, just like in a real election.

The ballots are cast in a locked box and then counted on the aged mahogany bar, where white-aproned barmen expertly mix the driest of Martinis or pour out tumblers of single-malt Scotch.

The MacElhones have been at the heart of Harry's Bar since its opening on Thanksgiving Day 1911.

Harry MacElhone, a Scot from Dundee, was hired as bartender by original owner Tod Sloane, an American jockey living in Paris who opened "The New York Bar" after complaining he could not find a proper cocktail in the French capital.

Keen to recreate the atmosphere of a pre-Prohibition stand-up saloon in Paris, Sloane had the interior of a Manhattan bar completely dismantled and shipped across the Atlantic to Paris.

MacElhone, speaking in French, stressed that the management was "strictly impartial.

"We are the place where both Democrats and Republicans come for a drink. Everybody speaks to one another."

Patrick Runte had no confusion about the outcome on D-Day.

"Obama is going to make it," said the 43-year-old from Madison, Wisconsin.

"I don't even think it is going to be close.

"Let's give him four more years, because that is what it takes."

A barkeeper added jocularly: "If you don't vote for Obama, you won't get another drink!"

The barmen have even concocted special drinks for the candidates.

The "Romney" is absinthe-based. "It's a bit ironic for a Mormon," MacElhone said.

The "Obama" is built around cherry and peach liqueur and beer – the latter a wink at his beer recipes. The "Biden" "has vanilla and aged whiskey as the vanilla is a tribute to his softer side and the whiskey his age," according to the irrepressible owner.

The "Ryan" is rum-based.

Brien Richard McCarthy, who has been living in Paris for a decade, said voting at Harry's Bar was "always a slightly sentimental affair."

The bar, which has also drawn film stars from Humphrey Bogart to Clint Eastwood, is also famed for its cocktail creations.

The Bloody Mary, a mixture of tomato juice, vodka and spices, was first served at Harry's in 1921, and the French 75, White Lady and Sidecar were dreamt up at the bar as well.

The bar has also featured in works of fiction — Ian Fleming's James Bond called it the best place to get a "solid drink" in Paris — and it was said to be the place where George Gershwin composed the music for "An American in Paris."