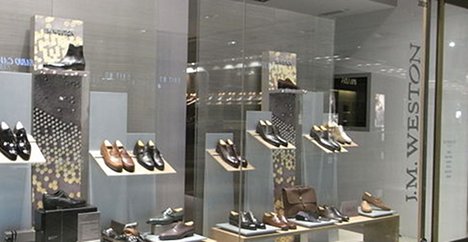 Despite his 30 years of experience, it still takes Bernard three hours to finish sewing a seam, his gnarled hands working the thick leather with a stitching awl and cobbler's thread.

His employer is the high-end French shoemaker J.M.Weston, which manufactures 80 percent of its shoes in the central city of Limoges.

Bernard is one of some 860 people employed by the luxury craft sector in the Limousin, which together generates an annual turnover of €97 million.

Founded in 1891, J.M.Weston now operates two tanneries, with the aim of nurturing in-house know-how, even producing its own shoe polish.

The glove-maker Agnelle, based in the Limousin town of Saint-Junien, is run by Sophie Gregoire, great-granddaughter of the house's founder, and part of a family glove-making tradition dating back to the 11th century.

It, too, keeps the whole production chain in-house.

Gregoire's mother Josie Leroyer set the firm on its present course in the late 1960s, when she convinced the French fashion house Dior to entrust it with making its gloves.

Her daughter completed the job, buying back the family firm, and "reintroducing the basics of the profession: excellence, expertise and in-house skills," said her workshop head Joelle Talbot.

"She realised what unique know-how was about to be lost," said Talbot.

Today the firm's clients include Givenchy, Marc Jacobs and Ralph Lauren. Its 20 seamstresses produce some 120,000 pairs of gloves each year, with complete mastery of the 30-odd steps in the production process.

Based in Limoges itself, the C 2000 dressmaker is one of the only French firms specialising in an haute couture sewing technique for fluid garments, called "flou", supplying Chanel, Lanvin or Dior.

Its general manager Bernard Blaizeau is well aware of the need to nurture the expertise of his 32 seamstresses, whose wages account for the bulk of production costs, 70 percent of turnover.

Ensuring their skills are handed down to the next generation is a prime concern.

"We systematically replace people upon retirement, and each new recruit is mentored by the person they will succeed for two or three years before the handover," Blaizeau explained.

"Each newcomer has a godmother, who teaches her the ropes of haute couture. It's a big investment."

Along with the Paris area and the Rhones-Alpes region around Lyon, Limousin is one of the three French regions with the highest number of traditional craft-based companies, what France describes as "living heritage" firms.

To highlight its assets, regional authorities are currently setting up a Limousin luxury label, called "Dare to be different", with the aim of linking up its artisans and promoting their skills.

"We need to export towards emerging markets with strong potential and financial capacity," argued the head of the Limousin Regional Council Jean-Pierre Denanot.

"Going international is crucial to keeping our crafts alive," agreed Blaizeau, who hopes local firms can learn from the example of J.M.Weston, for instance, which has successfully expanded aboard.

The regional chamber of commerce has already created an association "Luxury and excellence in Limousin", that brings together 13 firms at the very top end of the market.

Some have already moved with success into Russia, China or Saudi Arabia, said the chamber's head Jean-Pierre Limousin.