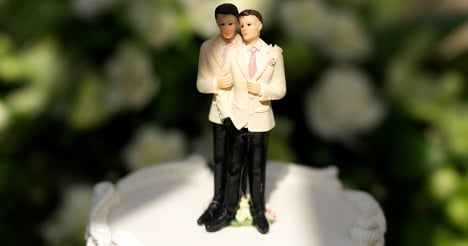 Twenty-seven-year-old Thomas wants the world to know he's proud of his "two mothers". But he still prefers to speak under a false name to protect them, sign of France's conflicted stance on gay families.

Gay and lesbian marriage and adoption have become a flashpoint issue for the incoming Socialist government, with a draft bill covering both rights fuelling a snowballing revolt in parliament and beyond.

Last Tuesday, hundreds rallied in 75 French cities against the plans, slated to go before the cabinet on November 7 and parliament in January, in line with a manifesto pledge by President François Hollande.

"This is a major issue for our civilisation, and we want a public debate," summed up Hervé Mariton of the right-wing UMP party, part of a 121-strong coalition of opposition lawmakers demanding the text be shelved.

France has allowed gay civil unions since 1999. Marriage would take things one step further, with the shrillest Catholic opponents warning of a slippery slope that could break down taboos on polygamy, even incest or paedophilia.

Some 1,750 mayors and local officials have signed a petition warning they would refuse to officiate at gay marriages, but polls suggest the wider French public is ready for change, with up to two thirds backing gay marriage.

The real sticking point is gay adoption, on which voters are evenly split.

"Many of us believe that what matters are the rights of children, not the right to have children," said the centrist Charles de Courson of the lawmaker's coalition.

The swell of emotion runs both ways, however.

Launched Tuesday by the "anti" camp, the hashtag #UnPapaUneMaman (#OneMotherOneFather) was subverted by backers of gay marriage and adoption, becoming the day's top French Twitter trend.

The same day, a picture of two young women embracing before a glum line-up of protestors went viral on social networks, becoming an instant symbol of the drive for equal gay rights.

"What matters is the love you receive"

Thomas was one of number of young adults – contacted via rights groups or word-of-mouth – who agreed to talk to AFP about their experience of growing up in same-sex families.

"I grew up from the start with my two mothers, it was never an issue for me," said Thomas, born of an artificial insemination – carried out abroad since the practice is not available to single women in France.

"Nothing was ever hidden from me," added the young man, now himself a father.

"My parents met in high-school. They split up when I was very young. My mother later explained that she preferred women – and that was always just fine by me."

"What matters is the love you receive," said the young woman, though she admits that as a child she remained "vague" when asked about her family.

Alexandre Chevalier, 38, founder of a Lyon-based association for children of gay parents, suffered while growing up – not because his father was gay, but because he delayed coming out for years because of the social stigma.

A majority of child psychiatrists questioned by AFP believed opening marriage and adoption to gay couples would not harm children, so long as they are clearly told where they come from.

That said, Bernard Golse of Paris' Necker hospital also stressed the lack of wide-ranging studies on the question, in France or elsewhere.

What would the new French law change in practice? Today, French lesbians can freely travel abroad, to Belgium for instance, for an insemination. Though much rarer, gay men can also pay for a surrogate mother abroad – even though the practice is illegal in France.

Co-parenting arrangements, in which gay men and women agree to have children together, and share parenting duties, are increasingly common.

Both gay men and women can adopt as single parents, and many do, even though they may have to jump through some legla hoops first.

And in the event of a separation, or death, the "unofficial" parent is left with no legal rights over the child or children – a situation decried as deeply unjust by gay and lesbian organizations.

For the reality on the ground is that some 40,000 French children already live in same-sex households according to the demographic institute INED. Gay and lesbian groups say the true number is as high as 300,000, if you include all children who have at least one gay parent.

"People used to point the finger at the children of divorcees or single mothers," said child psychologist Agnes Florin. The new law, she argues, will make life easier for thousands of children by bringing their families into the mainstream.

France's last Socialist government faced down mass street protests when it brought in the PACS civil union, since then massively adopted by gays and heterosexuals alike.

Will this debate go the same way? François Bayrou, a former presidential candidate and opponent of the bill, hopes not.

"The subject is becoming explosive. And in troubled times like these, the last thing France needs is this kind of social upheaval."