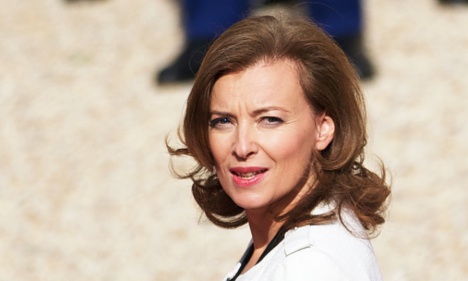 "I stumbled a bit at the beginning," Valerie Trierweiler admitted in her first public speech in her new role as an ambassador for the humanitarian foundation established by Danielle Mitterrand, the first wife of a French president to have a public role.

"My career (as a journalist) has not completely been put to one side, but it is no longer the priority," Trierweiler added at the inauguration of a fountain financed by the foundation.

Looking typically elegant in a camel coat, black trousers and her trademark stilettos, she added: "You do not become first lady overnight, but I now feel great joy doing these sort of things and I will continue to do them.

"I've understood that things are expected of me and that I can be useful, and I find that very touching."

Trierweiler has endured a torrid time since her partner Francois Hollande won the presidential election in June, with a string of articles and books documenting the complicated history of their relationship and her alleged feud with his former partner Ségolène Royal.

The image of Trierweiler that has emerged from the accounts is that of a tempestuous personality who keeps Hollande on a tight leash and is ferociously jealous of Royal.

Whether that image is accurate or not, it is one the 47-year-old has herself helped to create, most famously by tweeting her support for Royal's opponent in parliamentary elections in June.

The fallout from that affair had only just subsided when a new book emerged claiming that Trierweiler conducted an affair with a prominent right-wing politician at the same time as she was seeing Hollande, who was then still officially with Royal, the mother of his four children.

Trierweiler, who is twice divorced, is suing the authors of the book for defamation.