Lawyer Rodolphe Costantino said prosecutors in Versailles had extended their investigation to include about 10 more suspects, after initially charging three firefighters in March 2011 for having sex with the girl between 2008, when she was only 13, and 2010.

The girl has said she had sex with about 20 firefighters over the period after starting a sexual relationship with one firefighter who had been called in after she suffered a seizure.

"The Versailles prosecutor's office has extended the investigation," Costantino said. "It now targets possibly half of the incidents my client has exposed, about 10 firefighters from Paris and different stations in the Paris region… It's a first step."

The suspects are facing charges of rape, sexual assault and corruption of a minor for having sex with someone under 15, France's age of consent.

The Versailles prosecutor's office refused to comment on the case because it involves a minor.

The girl came forward to her parents about the abuse and filed a complaint after attempting suicide in 2010.

Though highly respected in France, where they often act as general first-responders as well as fighting fires, firefighters have suffered from a series of sex-related scandals in recent years.

On Thursday a court in Abbeville in northern France convicted a firefighter of corrupting a minor and gave him a four-month suspended sentence after a teenage girl had sex with several firefighters at their station in 2010.

In Paris, 11 firefighters were charged after a recruit alleged in May that he was raped in an initiation ceremony filmed with a telephone. 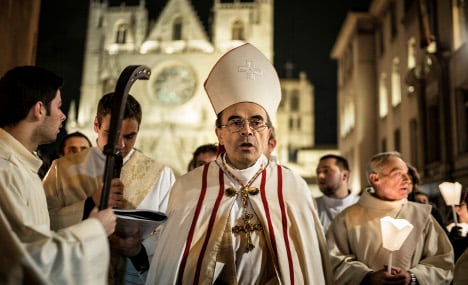 Barbarin, the archbishop of Lyon in central France since 2002, had been accused of failing to remove a priest from his diocese when he became aware the man had sexually abused young boys 25 years ago.