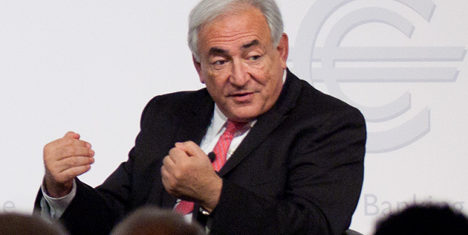 The magazines named in the suit are VSD and Closer, which had published photographs of Strauss-Kahn and Myriam L'Aouffir embracing and other shots of the pair on vacation.

Strauss-Kahn's lawyer Richard Malka said it was clear the photographs were not in the general interest, adding sarcastically: "All this is not being done to sell copies, it's just to inform us."

The VSD photographs showed them on holiday in Corsica and claimed that with his new girlfriend, "DSK has become a gentleman again".

L'Aouffir's lawyer Laurent Jourdan said she was seeking €100,000 from each publication.

He said his client, who works at the France 2 television channel, had been "totally unknown to the public", and now the "most intimate details of her private life were unravelled."

Strauss-Kahn, a one-time contender for the French presidency, suffered a stunning fall from grace following his arrest at a New York hotel on sexual assault charges last year and a subsequent string of sex-related investigations in France.

Strauss-Kahn's wife of some two decades, Anne Sinclair, recently confirmed their split. A former television journalist and the heiress to a large fortune, Sinclair now runs the French edition of the Huffington Post.

Closer is also currently being sued for damages by Britain's Prince William and his wife Catherine over snatched long-lens shots of the couple on holiday in France, some of which show Catherine naked.