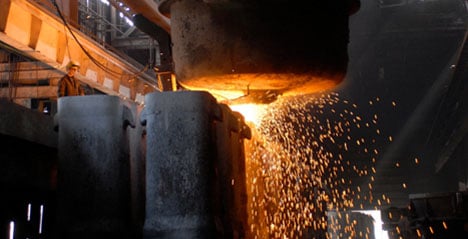 The fate of the furnaces has become a litmus test of Socialist President Francois Hollande's strategy for fighting rising unemployment and for his aim to raise the flagging competitiveness of French industry.

The closure also follows controversy, and bitterness among workers, over what were seen as assurances about activity and jobs when Mittal acquired the European Arcelor group.

The furnaces have been idle for 14 months and employ 629 of the 2,500 employees at the Florange plant in the Lorraine region of eastern France, the traditional centre of France's steel industry.

The statement put an end to a long period of limbo for the furnaces, saying that they would be closed for good.

The management's deadline of 60 days to the government also covered the company's coking plant which supplies another ArcelorMittal plant in Dunkirk.

But despite the announcement, the management said it planned to make heavy investments in the Florange site.

Saying the group "strongly believed" in the future of Lorraine, ArcelorMittal's vice-president for Europe Henri Blaffart said "we will continue to significantly invest" in the Florange plant.

Blaffart said in a telephone conference call that the firm had invested more than two billion euros in France in the past five years and €128 million in Florange since the ArcelorMittal group was created in 2006.

"We want Lorraine to become a centre of excellence for flat carbon sheets" mainly destined for the automobile industry," he said, adding that future investment in Florange would be "of a level to allow this site to fulfil its mission."

As the management announced its decision at the French headquarters in a Paris suburb, scores of workers picketed at the entrance to the Florange site.

"It's a crucial week, I am calling for mass mobilisation," said Edouard Martin, a local official from the leading CFDT union.

At the company headquarters, Walter Broccoli from the FO union urged the government to "nationalise the steel sector," asking Industry Minister Arnaud Montebourg to "have a bit of courage."

Hollande met steel tycoon Lakshmi Mittal last week to discuss the future of the plant amid reports the state was offering to buy the furnaces for a symbolic euro in the hope that it can find a firm willing to keep them working.

The Socialist government is planning legislation that will ban profitable firms from closing down a plant and shedding workers without first seeking another company to take over the business.

The law was an election pledge by Hollande, who is under growing pressure to deal with unemployment as he grapples with a €37 billion hole in public finances that he plans to plug with sweeping tax hikes and belt-tightening.

Figures released last week showed that unemployment had risen to just over three million people, equivalent to 10% of the workforce.

ArcelorMittal is the leading supplier of steel products in all major markets including automotive, construction, household appliances and packaging. It operates in 60 countries and employs about 260,000 people worldwide.

The firm has temporarily closed several sites in Europe, in France as well as Belgium and Spain. In 2009, the firm closed furnaces in Gandrange, also in eastern France due to falling global demand in steel and high production costs in Europe.