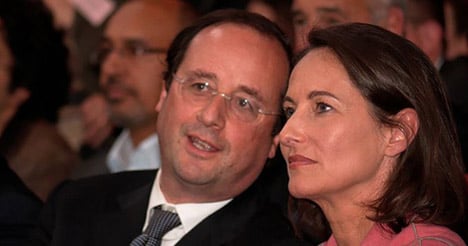 Hollande, now living in the Elysee Palace with former journalist Valerie Trierweiler, went to farcical lengths this week to avoid bumping into his ex while he attended the UN General Assembly of the United Nations in New York.

Royal was there for a meeting of Socialists from around the world and the former couple came within a few metres of each other before Hollande did an abrupt about-turn and took a convoluted route to the meeting he was due to attend.

This did not go unnoticed by the scores of journalists in the vicinity and the subsequent mocking depictions of the scene in the French press have not gone down well with Royal.

"That's enough now," she was quoted as saying by Friday's edition of Le Figaro. "Had it been (other Socialist leaders) Martine Aubry or Harlem Desir, he would have come and greeted them."

Hollande's apparent paranoia about being seen in the company of Royal is widely seen as reflecting a fear of angering his current partner Trierweiler.

Just weeks after Hollande's election, Treiweiler generated unwelcome headlines by tweeting her support for a renegade Socialist candidate fighting Royal for a parliamentary seat, which he won.

A string of books have since appeared chronicling the history of the love triangle, all of which paint Treirweiler as an impetuous character.

According to the accounts, Hollande first became enamoured of the journalist back in the 1980s and they were already a couple in 2007, although Hollande publicly pretended to be still with Royal when she ran unsuccessfully for president that year.

In the wake of the "poisonous tweet" scandal, Royal had made it clear she expected Hollande to give her a top job as compensation for the loss of her parliamentary seat.