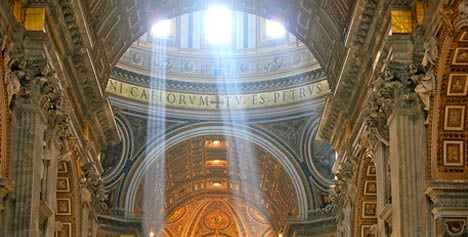 Father Louis Brisson was beatified in Troyes, eastern France, at a packed cathedral in a ceremony presided over by Cardinal Angelo Amato, who leads the Vatican department that examines claims to sainthood.

The ceremony was relayed to the crowd outside the cathedral on a giant television screen.

Brisson lived from 1817 to 1908, but it was the healing of an eight-year-old boy in Ecuador many years after his death that the Church has now acknowledged as a miracle.

The boy had had his foot badly injured and members of the Oblate Sisters of St. Francis de Sales, one of two orders Brisson had founded, prayed for him for nine days. The boy made a complete recovery from his injury.

Saturday's event was the official consecration of Pope Benedict XVI's December decision to acknowledge that this healing had been miraculous — and through Brisson's direct intercession.

Doctors who had examined the case could offer no medical or scientific explanation for the boy's dramatic recovery, said a statement from the Congregation for the Causes of Saints, the Vatican department Amato leads.

Brisson's elevation to the ranks of the blessed, as the beatified are described, puts him one step closer to being declared a saint. But that would require Vatican recognition of a second miracle attributable to him.