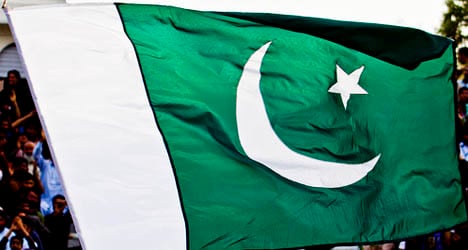 Up to 50 people were injured as police drove back thousands of protesters, many armed with wooden clubs, trying to storm Islamabad's heavily-guarded diplomatic enclave — home to Western embassies including the US, British and French missions.

The crudely made "Innocence of Muslims" film — produced by US-based extremist Christians — has triggered protests in at least 20 countries since excerpts were posted online and more than 30 people have died in related violence.

Tensions over the film were fuelled after the publication by French satirical weekly Charlie Hebdo on Wednesday of obscene cartoons depicting the founder of Islam, including two showing Muhammad naked.

In Islamabad, an initial demonstration of around 1,000 swelled to around 5,000 with the arrival of protesters carrying the flags of hardline Islamist groups.

The government called in the army to protect the diplomatic enclave after protesters broke through a barrier of shipping containers set up by police to block a road leading to the area.

Thousands of Muslims also marched in the Nigerian city of Zaria and burnt US and Israeli flags to protest the film, crying "Death to America" and "Death to Israel".

In the Afghan capital Kabul hundreds protested chanting "Death to France! Death to America!", while up to 100 people demonstrated outside the French embassy in the Iranian capital Tehran.

Condemnations of the film and cartoons meanwhile continued to pour in.

The head of the Organisation of Islamic Cooperation, Ekmeleddin Ihsanoglu, expressed "shock and dismay" over the cartoons and warned they would "further exacerbate the ongoing turmoil and violence created by the release of the anti-Islam film."

The film and the cartoons constituted a "deliberate, motivated and systematic abuse" of freedom of speech and "posed a clear and present danger to peace, security and stability in the region as well as the global context," he said in a statement.

Egypt's influential Muslim Brotherhood demanded France take action over the cartoons, calling for "firm and rapid measures against" Charlie Hebdo. UN chief Ban Ki-moon had joined condemnation of the film on Wednesday, saying freedom of expression should not be abused "to provoke or humiliate some others' values and beliefs".

"Freedom of expression, while it is a fundamental right and privilege, should not be abused by such people, by such a disgraceful and shameful act," Ban said.

The low-budget, amateurish video appears to have been the work of Nakoula Basseley Nakoula, an Egyptian Coptic Christian and convicted fraudster living in California who went into hiding Saturday.

Cast members have said they had no idea the video was about Muhammad, as all references to him were dubbed over the original video later. One actress in the film, Cindy Lee Garcia, said she is suing the reputed producer.

Protests against the film took place in many countries on Wednesday, including in Pakistan, Afghanistan, Lebanon and Sri Lanka.

Hezbollah leader Hassan Nasrallah has called for protests all week in Lebanon and major demonstrations are expected in Pakistan again on Friday, the Muslim day of prayer, where the government has declared a national holiday in honour of Muhammad.

The US State Department on Thursday warned its citizens to avoid travel to Pakistan and Washington has moved to boost security at its diplomatic missions worldwide.

Among those killed in the violence were four Americans, including US ambassador to Libya Chris Stevens, who were attacked at the US consulate in Benghazi.

France has also been bracing for a backlash and in anticipation of potential protests on Friday, Paris said it would shutter its diplomatic missions, cultural centres and French schools in around 20 Muslim countries.

French police said Thursday they had also forbidden a demonstration planned for Saturday in front of Paris's Grand Mosque.

The interior ministry has said it will deny all requests for permits to protest the film after a demonstration last weekend near the US embassy in Paris turned violent.

Leaders of France's Muslim community — the largest in western Europe — said an appeal for calm would be read in mosques across the country on Friday but also condemned Charlie Hebdo for publishing "insulting" images.

Charlie Hebdo's editor, Stephane Charbonnier, described those getting irate over the cartoons as "ridiculous clowns" and accused the government of pandering to them by criticising the magazine for being provocative.