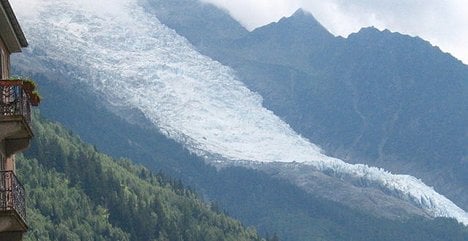 The Bossons glacier on Mont Blanc, where the plane crashed. Photo: Daniel D

The jute bag, stamped "Diplomatic mail" and "Ministry of External Affairs", was recovered by mountain rescue worker Arnaud Christmann and his neighbour Jules Berger on August 21.

"Some tourists came and told us they had seen something shining on the Bossons glacier," so he and his neighbour decided to go have a look, Christmann told AFP on Wednesday.

"We found pieces of the cabin, a shoe, cables – it's a real dump up there!"

The two men also came across a plane wheel and, 20 metres (yards) further on, the diplomatic bag that was "sitting as if someone had just placed it there."

"We were hoping for diamonds or at least a few gold ingots. Instead we got some soaking wet mail and Indian newspapers," Christmann quipped.

"It's not the sort of thing you find very often in the mountains – the mail's going to arrive 46 years late."

The Kangchenjunga, a Boeing 707 flying from Mumbai (Bombay) to New York, crashed on the southwest face of Mont Blanc, western Europe's highest mountain, on January 24, 1966 as it descended towards a scheduled stopover in Geneva, Switzerland. All 117 people on board died.

The diplomatic bag was handed over to police in the town of Chamonix at the base of the mountain. The Indian embassy in Paris said Wednesday it had not
been informed of the discovery but that officials would be looking into it with a view to recovering the bag.

Roche also came across part of an engine from the Malabar Princess, another Air India plane which had crashed in a virtually identical location in 1950.

INDIA
Where to celebrate Diwali in France in 2019
Url copied to clipboard!