Christine Ahmed awoke after her long nap presuming that she had arrived at her destination at Paris' Charles de Gaulle airport only to realise that the passengers and crew had changed, and that she was heading back to Asia.

The flight left Lahore on Tuesday midday heading for Paris via Milan, bringing the woman all the way back to Lahore on Wednesday morning.

Pakistan International Airlines (PIA) has now launched an investigation into how ground crew failed to noticed that the woman remained on board during the two-hour stopover in Paris.

According to the airline the situation was not brought to the attention of the crew and immigration officials at Lahore airport were the first to notice the mishap.

The woman, who is married to a Pakistani, was put on a new flight on Wednesday with another carrier as PIA did not have anything available.

The issue of the cost of the new ticket to Paris remained unresolved however, with the airline unwilling to foot the bill.

"It is the responsibility of the passengers to get off the plane," PIA spokesperson Sultan Hassan told the AFP news agency. 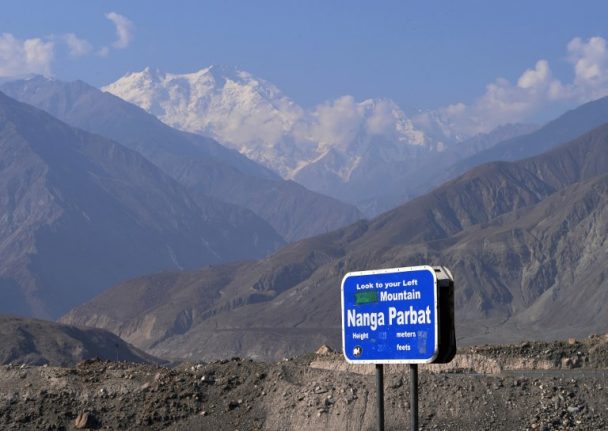 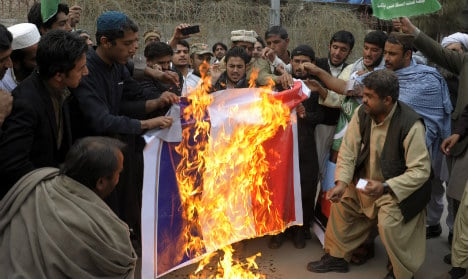 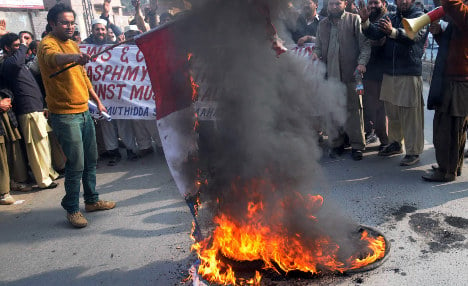 A Pakistani man burns the French flag at a rally on Thursday. Photo: AFP

AFP’s Asif Hassan was covering a protest staged by religious party activists outside the French Consulate in Karachi, when he was shot in the chest.

"The bullet struck his lung, and passed through his chest. He is out of immediate danger and he has spoken to his colleagues," Doctor Seemi Jamali, a spokeswoman for Karachi's Jinnah Hospital where Hassan was taken, told AFP.

Cities across Pakistan on Friday held protests against the depiction of the Prophet Muhammad in French media following last week’s terror attack on satirical magazine Charlie Hebdo which left 12 dead.

The magazine this week published a "survivors" issue featuring an image of the Prophet Mohammed weeping, which sold out Wednesday before more copies of an eventual print run of five million hit newsstands in France.

The cover was then featured in a number of French newspapers and other media.

The rallies in Pakistan come a day after Prime Minister Nawaz Sharif led parliament in condemning the reprinting of the cartoons, regarded by many Muslims as offensive.

Tens of thousands of religious party activists were on Friday expected to turn out nationwide, including followers of Jamaat-ud-Dawa, the charitable wing of the banned Lashkar-e-Taiba militant group which masterminded attacks on Mumbai in 2008.

The group has come under the spotlight following Pakistan's pledge to crack down on all militant groups, including those considered friendly to its interests, in the aftermath of a school massacre last month that left 150 people dead.

The Jamat-ul-Ahrar faction of the Pakistani Taliban meanwhile issued a statement lauding the two brothers who carried out the Charlie Hebdo assault, saying "they freed the earth from the existence of filthy blasphemers".

"O enemies of Islam beware! Every youth of this Ummah (Muslim community) is willing to sacrifice himself on the honour of (the) Prophet," said the statement, which was sent via email by spokesman Ehsanullan Ehsan.

In addition to rallies by religious parties, lawyers in central Punjab and northwestern Khyber Pakhtunkhwa provinces have vowed to boycott court proceedings to display their displeasure over the sketches. 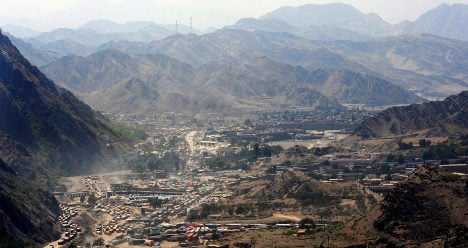