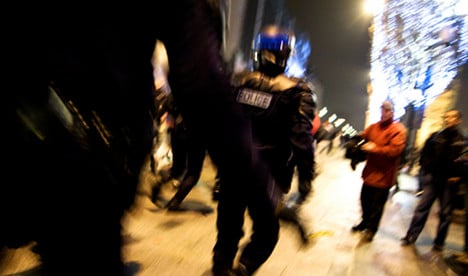 injured was triggered by heavy-handed policing of a funeral and wake in the neighbourhood on Sunday August 12.

Police chiefs ordered an internal investigation which has now concluded that the officers involved had acted appropriately and within guidelines.

In particular, the arrest of a man who was driving on the wrong side of the road was "legitimate and necessary," a preliminary report said.The arrest of the man triggered a confrontation between police and dozens of youths who had been at the wake for a 20-year-old who died in a motorcycle accident the previous week.

Police used tear gas to disperse the group of youths that night and more serious clashes followed 24 hours later in which several cars, a local school and a sports centre were badly damaged by fire.

A total of seven people, four of them minors, have been arrested since the rioting, which involved more than 100 youths.

The case of a third man, who faces more serious charges of having incited others to riot, is due to take place on September 12.

Two of the minors have been charged with assaulting police officers.

The unrest in Amiens has helped place crime and security at the top of the political agenda in France.

The new Socialist government has promised to reverse a decline in police numbers with special attention given to marginalised urban areas which have periodically erupted into violence over the last decade.