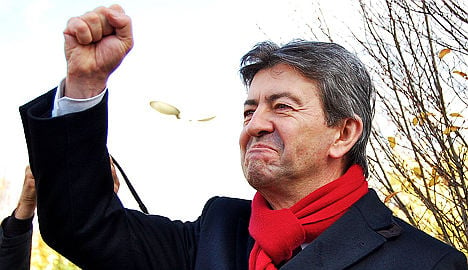 Melenchon, a former Socialist minister who left the party and stood against Hollande as a candidate of the Communist Party-backed Left Front in the presidential elections this year, said ministers who disagreed with Hollande's policies should come out of the closet.

"You exist by being independent, not by being carried along by someone else," he said. "We need you to come and help us in our battle."

Euro MP Melenchon secured just over 11 percent of the vote in the first round of the presidential elections in April and his supporters helped Hollande defeat outgoing right-winger Nicolas Sarkozy in the second round.

He has been absent from French politics since losing a head-to-head battle with Marine Le Pen of the far right Front National for a seat in parliament in June but returned to the front line this week with a flurry of media appearances.

Melenchon and his allies accuse Hollande of back-tracking on his election promises to promote jobs and growth by signing up to EU deficit-reduction targets which will require the government to slash public spending.

The left is also hoping to capitalise on disquiet among some Socialist ministers over the hard line Hollande and his interior minister Manuel Valls have taken on the issue of crime and security, notably in relation to a riot in the northern city of Amiens last week and the dismantling of Roma camps around French cities.