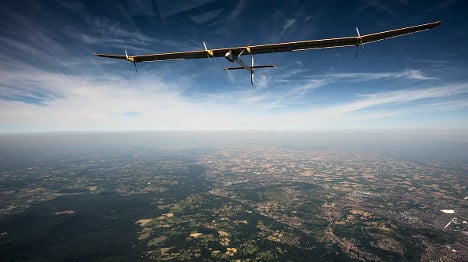 Pilot Bertrand Piccard took the plane up into the sky from an airfield near Toulouse on its journey back to Payerne in Switzerland, from where it left on May 24th for the Moroccan capital Rabat via Madrid.

The high-tech aircraft, which has the wingspan of a large airliner but weighs no more than a saloon car, is fitted with 12,000 solar cells feeding four electric engines.

Solar Impulse had to wait for a week in Toulouse for the right weather conditions. It departed Tuesday in a cloudless sky and was due to arrive in Payerne around 1800 GMT.

Once this final stage is completed, the 6,000-kilometre (3,700-mile) journey will be the longest to date for the aircraft after an inaugural flight to Paris and Brussels last year.

The flight was being live-streamed on www.solarimpulse.com, the website of the project run by Piccard, an explorer who has travelled around the world in a hot-air balloon, and fellow pilot Andre Borschberg, who took turns to fly the plane on its latest journey.

The trip was intended as a rehearsal in the run-up to a round-the-world flight planned for 2014 by an updated version of the plane.

The organizers said in a statement that Solar Impulse had now demonstrated the reliability of the technology it uses as well as its energy efficiency.

Solar Impulse made history in July 2010 as the first manned plane to fly around the clock on the sun's energy.

It holds the record for the longest flight by a manned solar-powered aeroplane after staying aloft for 26 hours, 10 minutes and 19 seconds above Switzerland, also setting a record for altitude by flying at 9,235 metres (30,298 feet).