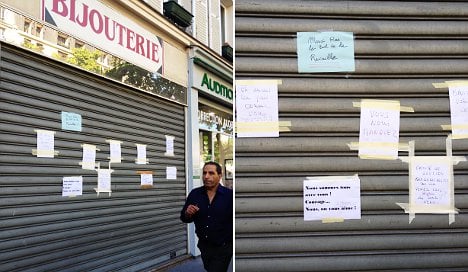 Messages of support for the jeweller posted on the shutters of his shop (Photo: Christophe Bauer)

The jeweller, named Alain, 60, shot the man last week after he entered the shop, in the seventh arrondissement of Paris, with a pistol in his hand.

It was the third time Alain’s shop had been burgled, with the thieves shooting at him on both previous occasions.

An autopsy revealed the man had been shot twice, in the shoulder and the hip.

The jeweller, who had a licence for the gun he kept in his safe at the shop, has been released on bail and banned from keeping a firearm.

“He regrets the death of the man, but is sure he didn’t have any other choice. It was either him or the thief.”

The thief, 52, was not known to the authorities for similar crimes before the incident, and had never spent time in prison, according to a source close to the investigation.

It was discovered after the incident that the thief’s gun was not loaded.