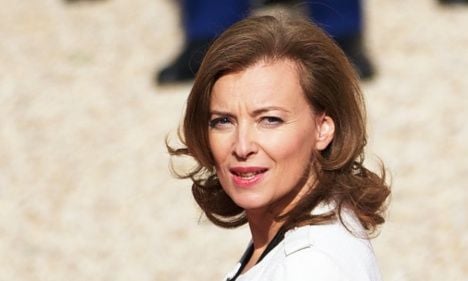 The 27-year-old Thomas Hollande said his father was “stunned” after Valerie Trierweiler’s tweet backing a dissident contesting against Segolene Royal, the president’s ex-partner and mother of their four children.

In comments published in this week’s edition of French weekly Le Point, he said: “What I criticise about the tweet is that it pushed private life into the public sphere,” said Thomas Hollande, a lawyer.

“I really felt for my father, he hates his private life being brought out into the open.

“It destroyed the normal image he had built up,” he said, referring to Hollande’s pledge to usher in a “normal” presidency after the perceived “bling-bling style” of his predecessor Nicolas Sarkozy.

The Twitter message from Trierweiler wishing good luck to an opponent of Royal, who lost the election, livened up an otherwise lacklustre campaign in its final stages.

“I knew that something from her could have emerged one day but not such a hard blow,” Thomas Hollande said. “It’s mind-blowing.”

He added that his father then asked him out to dinner and told him not to do anything to take the “soap opera” further.

The younger Hollande’s advice to Trierweiler was simple: “No second tweet!”

However, Thomas Hollande denied to AFP that he had given an interview to Le Point and accused the weekly of distorting his words.

“I deny having agreed to an interview with Le Point. What they reported me as saying, some of which was distorted or taken out of context, was said during an informal conversation” with a Le Point journalist.

The Le Point journalist, Charlotte Chaffanjon, tweeted in response that: “It was an article not an interview. No statement was deformed.”

There has long been speculation of intense rivalry between Royal and Trierweiler.

Hollande stood loyally by Royal as she battled former president Sarkozy for the presidency in the 2007 race, but he had reportedly been in a relationship since 2005 with Trierweiler, a twice-divorced 47-year-old mother of three.