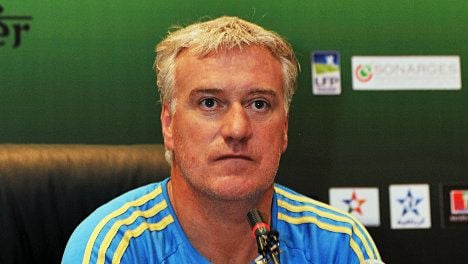 Blanc had guided the French to the Euro 2012 quarter-finals – the minimum requirement of the FFF – but dressing room discord and two outbursts by Samir Nasri had not helped Blanc’s cause.

Deschamps immediately became the favourite and lent credence to the fact by quitting Marseille last Monday.

“Noel Le Graet, President of the FFF, and Didier Deschamps reached agreement after the conclusion of their talks for him to be named France coach,” read the statement.

Both men are to hold a joint press conference on Monday at the federation headquarters at 1530 GMT.

“Didier Deschamps is obviously the man of the moment,” said Thiriez.

“The French team needs in this difficult context, a man of his stamp and experience.

“He can naturally count on the support without fail of the professional football world in France.”

Deschamps contract is expected to be for two years – taking him up to the 2014 World Cup finals in Brazil, with another two likely to be on the table should they qualify for them, while he is expected to be assisted by his faithful Marseille lieutenant Guy Stephan.

It was Stephan, who approached Deschamps on Le Graet’s behalf when it became apparent that Blanc might not sign the new contract, as he knew the French football supremo from owning a house in the Brittany town of Guingamp where Le Graet had served two terms as Socialist mayor.

Deschamps’ first task will be to prepare the squad for a high profile friendly with Copa America champions and World Cup semi-finalists Uruguay in Le Havre on August 15th while their first World Cup qualifier is against Finland on September 7th.

However, with just one automatic qualifying spot up for grabs in the shape of group winners, France face a tough task to take that one as two-time European champions and World Cup holders Spain are in the same group.

Belarus and Georgia are the other two sides.