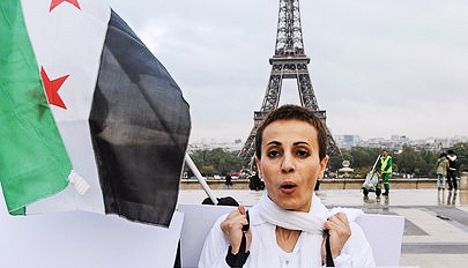 US Secretary of State Hillary Clinton also rounded on Russia and China, telling delegates from over 100 countries gathered in Paris that the two veto-wielding UN Security Council members were blocking progress towards peace.

The “Friends of Syria” meeting insisted that Assad would have to quit and sought a resolution under the UN charter’s Chapter 7, which provides for possible sanctions and military action.

But it stressed that the immediate action under Article 41 provided only for non-military intervention.

German Foreign Minister Guido Westerwelle backed the call for non-military action for the time being, saying force should only be discussed “when the implementation of the sanctions has not really made the progress they should have”.

French President Francois Hollande also pushed for the Security Council to get tough with Damascus, while the Syrian opposition called for humanitarian corridors and a no-fly zone.

A peace plan drawn up by former UN chief Kofi Annan, which insists on a cessation of violence by all sides, has made little headway and activists say an estimated 16,500 people have now died in the 16-month uprising.

A meeting last weekend of world powers in Geneva agreed to a transition plan that the Syria opposition, the West and Russia have interpreted differently, but Clinton insisted the plan amounted to a call for Assad to go.

“It is imperative to go back to the Security Council and demand implementation of Kofi Annan’s plan including the Geneva communique that Russia and China have already agreed to,” Clinton said.

“We should go back and ask for a resolution in the Security Council that imposes real and immediate consequences for non-compliance, including sanctions,” ranging from economic measures to military force, she added.

The West insists Assad should not be part of any new unity government and the Syrian opposition rejected the Geneva talks as making concessions to Damascus under pressure from Russia.

Taking a tough tone, Clinton said she thought Russia and China did “not believe they are paying any price at all for standing up on behalf of the regime”.

“The only way that will change is if every nation represented here directly and urgently makes it clear, that Russia and China will pay a price. They are holding up progress, blockading it. That is no longer tolerable,” Clinton said.

Hollande said the uprising is now a threat to international security, echoing US calls for a tough UN resolution.

“To those who maintain also that Bashar al-Assad’s regime, as dislikeable as it is, can avoid chaos, I tell them that they will have both the most dislikeable regime and chaos. And this chaos will threaten their interests,” Hollande said.

Although Moscow did not attend the meeting, a diplomatic source insisted that “Russian political and security circles are changing their position”.

“They agree that the situation is deteriorating… even if they continue to defend Moscow’s policies,” the diplomat said on condition of anonymity.

The Paris meeting follows a gathering in Tunis and another in Istanbul, both of which called in vain for tougher action against Assad’s regime.

China did not attend either of those two meetings where the United States, France, Britain, Germany as well as Saudi Arabia and Qatar led a group of more than 60 members, including most EU states and many Arab League nations.

Assad’s regime was dealt another blow when it emerged Friday that General Munaf Tlass, the son of a former defence minister who was a close friend of Assad’s late father and predecessor, Hafez, had defected.

Tlass, a member of the inner circle of power in Syria, and a childhood friend of Assad, is the highest-ranking military officer to have abandoned the Syrian regime.

A source in Damascus told AFP that Tlass’s relations with the authorities became irreconcilable after the regime’s fierce assault on the Homs district of Baba Amr in February.

Tlass reportedly refused to lead the unit tasked with reclaiming Baba Amr, and Assad subsequently told him to stay at home.

Sources close to Tlass say his family is now in Dubai while others said he would soon head to Paris. The defection of a senior unnamed military figure was confirmed by French Foreign Minister Laurent Fabius.

A rights watchdog reported at least 29 people killed across Syria on Friday as protesters took to the streets in several provinces after being urged to call for a “People’s liberation war.”

In Geneva, the UN Rights Council issued a new resolution condemning the violence in Syria and the “widespread, systematic and gross violations” of human rights, including the “indiscriminate targeting” of civilians by the Syrian authorities.

The head of the main opposition group, the Syrian National Council, said at the Paris meeting that humanitarian corridors and a no-fly zone should be implemented.

“All steps have to be taken to establish humanitarian corridors and a no-fly zone,” Abdel Basset Sayda said, claiming that Assad’s regime “is about to fall”.

Morocco will host the next Friends of Syria meeting but no date has been set.