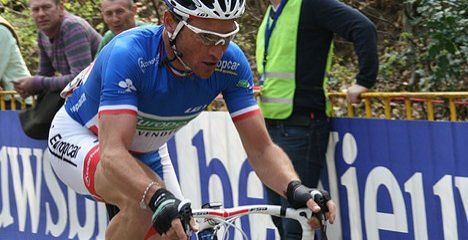 Voeckler’s 10-day spell in the race’s yellow jersey last year, when he finished in fourth place, raised hopes of a first French podium on the world’s biggest bike race in over a decade.

The last time a Frenchman won the race was in 1985 when Bernard Hinault took the last of his five Tour victories.

Voeckler, however, has fallen well out of contention.

He came into the race unsure of his chances having spent two weeks on the sidelines last month after suffering knee inflammation.

The Europcar rider complained of slight pain in his right knee on the first stage but after Tuesday’s tough third stage from Orchies to Boulogne-sur-Mer he complained of a “different” pain.

“It’s a different pain, not the same as the one I had two weeks ago,” said Voeckler.

After the first crash-marred day of racing Tuesday, Voeckler rallied the finish line in 148th place at over seven minutes behind the stage winner, Slovakian Peter Sagan.

Any chance of a podium spot is now over.

“Whether I arrive two or seven minutes adrift, it changes nothing,” added Voeckler.

For Europcar team manager Jean-Rene Bernaudeau, whose team gained invaluable exposure during Voeckler’s successful campaign last year, it was too much to bear.

“It’s a black day,” said Bernaudeau, who will now be hoping Pierre Rolland, who won the race’s white jersey for the best placed rider aged 25 and under last year, when he won the stage to Alpe d’Huez, can step up to the plate.

And despite wanting to continue, he is mindful of teammate Christophe Kern’s determination to continue the race last year, and his subsequent, six-month battle for recovery.

“I’m thinking about Christophe Kern who wanted to keep on going last year and paid for it with six months of his season,” said Voeckler.