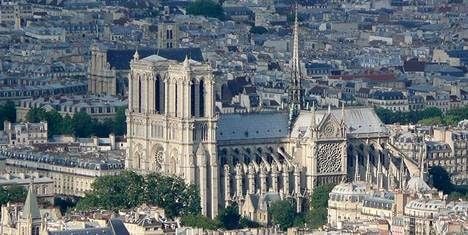 The Gothic cathedral on a little islet on the River Seine drew 13.6 million tourists, followed by Sacré Coeur – a basilica perched on a hill in Montmartre overlooking the city – whic attracted 10.5 million.

Nearly nine million went to the Louvre and the numbers at one of the world’s largest museums increased 5.6 percent year-on-year, while the Eiffel Tower got 7.1 million visitors, also a 5.6 percent increase.

The Pompidou Centre, a museum designed in the style of high-tech architecture by famed Italian architect Renzo Piano, was visited by 3.6 million people.

The Musée d’Orsay, housing an impressive collection of Impressionist and post-Impressionist paintings in a converted railway station, attracted 3.1 million.

“Visiting museums and monuments constitutes the main motivation for visiting Paris (65 percent),” said the office in a statement.

“With 72.6 million visitors, the numbers going to the 64 Parisian cultural sites surveyed increased by more than 2.5 percent” year-on-year, it said.

“Americans and Britons comprised the largest number of visitors” to museums, it said, stressing that the numbers of Brazilians, Russians and Chinese had risen substantially.