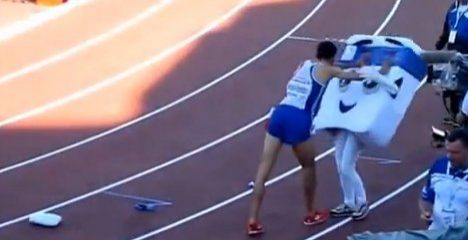 Defending champion, Mahiedine Mekhissi-Benabbad, 27, walked over to a mascot after the race, hit something out of its hand and then pushed it violently.

Inside the mascot there was thought to be a 14-year-old girl.

But this is not the first time the runner has shown violence towards mascots – in 2010 after the same race in the same Championships in Barcelona, he asked a mascot to kneel infront of him before pushing it to the ground.